According to the latest report by the state Employment Security Department, (ESD) more than 133,000 Washington residents filed for jobless benefits last week — an increase more than ninefold from a week earlier — as the shutdown of nonessential commercial activities to halt the pandemic also slows the state’s economy.

“We haven’t seen anything like this in volume and velocity [of claims] in the history of the unemployment insurance program — and that goes back [to] 1930, when it started,” said ESD commissioner Suzi LeVine during a conference call with reporters Thursday morning.

By comparison, LeVine said, the number of claims last week — 133,464 — was more than five times higher than in any week during the Great Recession.

And we’re far from out of it yet. Gov. Inslee says the state may extend the stay-at-home order.

Washington state appears to be achieving some “very modest improvement” in its battle against the coronavirus pandemic, but the state has not “turned the corner” and its stay-at-home order may need to be maintained beyond two weeks, Gov. Jay Inslee said Thursday morning.

Add construction workers to those furloughed by the order. Washington Research Council analyst Emily Makings explains that an unusual feature of Washington’s tax code means the halt to construction magnifies the revenue hit to the state general fund. 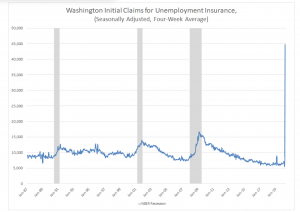 He also has charted claims by industry. Food service and the arts are among those most heavily hit, though the claims range across the economy.