A Pew analysis shows Washington tops the nation in state revenue growth in FY 2020 and FY 2021. The Pew graph below shows biggest gains and losses among the states. 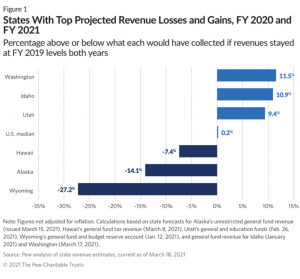 Idaho and Utah come in second and third. The biggest losses, Pew notes, come in states dependent on energy and tourism: Wyoming, Alaska, and Hawaii.

Of Washington, the report states,

Several states with strong economies leading up to the pandemic avoided a drop in total revenue.

Pew reports that, unlike Washington, Utah is using its revenue growth to provide tax relief.

Despite the recession, Utah similarly took in enough revenue to pass a series of tax cuts for Social Security recipients, veterans, and families with children.

A Pew analysis of the most recently revised general fund revenue forecast issued in every state finds vast differences in the projected toll of the recession over the two fiscal years since the pandemic’s start:

The Washington economy and revenue structure performed extraordinarily well. It’s a curious time for lawmakers to be considering tax increases and tax policy changes – like a capital gains tax and wealth tax – that could jeopardize the state’s economic vitality.