The Hill reports on this week’s release of ACT scores.

High school graduates from Northeastern states score highest on a key standardized test for college admissions, while students in Southern and Western states struggle most to meet educational benchmarks.
Students in Massachusetts, Connecticut and New Hampshire scored highest on the ACT…

Massachusetts also ranks first on our Opportunity Scorecard “achieve” measure, which focuses on education. The AP report carried by the Seattle Times points out,

The latest scores from the ACT college entrance exam suggest many of this year’s high school graduates aren’t ready for college-level course work.

In its annual score report released Wednesday, the testing company said only 38 percent of graduating seniors who took the exam hit the college-prepared benchmark in at least three of the four core subjects tested — reading, English, math and science. That compares with 40 percent last year.

Nationally, a lot of students take the test.

Sixty-four percent of the 2016 graduates took the ACT, meaning nearly 2.1 million students, compared with 59 percent the year before.

By comparison, 1.7 million graduating seniors in 2015 took the SAT, the other major college entrance exam. The College Board expects to release updated 2016 numbers for the SAT in the fall.

ACT participation varies significantly state-by-state. Just 25 percent of Washington students took the ACT in 2016, well below the national average. The variation is wide, as The Hill notes.

From the ACT press release:

Achievement levels on the ACT® test went down this year compared to last year among U.S. high school graduates, but the decline was driven by a significant increase in the number and percentage of students who took the exam. Those findings are reported in The Condition of College & Career Readiness 2016, ACT’s annual score report, which was released today…

This decline in overall readiness can be explained, in large part, by the addition this year of seven more states that funded the ACT for all 11th graders as part of their statewide testing programs. Scores went down significantly in each of those seven states, as expected, helping to drive the national average down.

From the full report, here are the states with 100 percent participation. 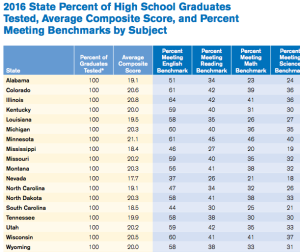 And here are the states with the lowest participation, a group that includes Washington. 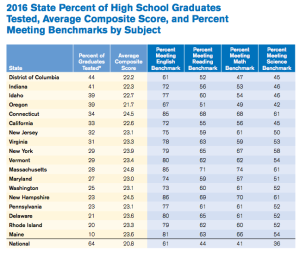 The significant variation in participation makes it difficult to draw hard conclusions about the differences among the states. Nonetheless, there’s a lot of useful information in the report, which we commend to your attention.