The Bureau of Labor Statistics reports today that there were 9.2 million unfilled jobs in the U.S. in May.

The number of job openings was little changed at 9.2 million on the last business day of May, the U.S.
Bureau of Labor Statistics reported today. Hires were little changed at 5.9 million. Total separations
decreased to 5.3 million. Within separations, the quits rate decreased to 2.5 percent. The layoffs and
discharges rate, while little changed over the month, hit a series low of 0.9 percent. This release includes estimates of the number and rate of job openings, hires, and separations for the total nonfarm sector, by industry, by four geographic regions, and by establishment size class.

The number of available jobs on the last day of May rose slightly to 9.21 million, from 9.19 million in April, the Labor Department said Wednesday. That is the highest since records began in December 2000. The previously-reported figure for April of 9.3 million was revised lower.

Earlier, we wrote of the enormous challenges employers are facing in finding workers to fill job openings. Calculated Risk has produced a chart showing hires, separations and job openings. Note the sharp spike in the yellow line for job openings. 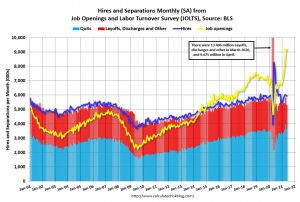 The huge spikes in layoffs and discharges in March and April 2020 are labeled, but off the chart to better show the usual data.

Jobs openings increased in May to 9.209 million from 9.193 million in April.  This is a new record high for this series.

The number of job openings (yellow) were up 69% year-over-year.

The labor shortage now represents a threat to the economic recovery.