It’s way too early to call it the beginning of the recovery, but today’s jobs report was the first bit of good employment news we’ve seen in months. The U.S. Department of Labor Bureau of Labor Statistics reports,

Total nonfarm payroll employment rose by 2.5 million in May, and the unemployment rate declined to 13.3 percent, the U.S. Bureau of Labor Statistics reported today. These improvements in the labor market reflected a limited resumption of economic activity that had been curtailed in March and April due to the coronavirus (COVID-19) pandemic and efforts to contain it. In May, employment rose sharply in leisure and hospitality, construction, education and health services, and retail trade. By contrast, employment in government continued to decline sharply.

Again, BLS acknowledges some data issues that cause the reported unemployment rate to be understated.

If the workers who were recorded as employed but absent from work due to “other reasons” (over and above the number absent for other reasons in a typical May) had been classified as unemployed on temporary layoff, the overall unemployment rate would have been about 3 percentage points higher than reported (on a not seasonally adjusted basis). However, according to usual practice, the data from the household survey are accepted as recorded. To maintain data integrity, no ad hoc actions are taken to reclassify survey responses.

The following chart from the report tracks the unemployment rate. 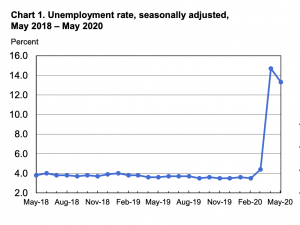 Calculated Risk reports that the jobs report was significantly better than expected.

The headline monthly jobs number was surprising, and well above expectations.  However, the previous two months were revised down significantly.  The headline unemployment rate decreased to 13.3% (probably closer to 16% according to the BLS).

Since the reference week included the 12th of May, this was too soon to be impacted by “reopenings” in most areas. That will be more of a June story. Instead this increase in employment was likely due to companies rehiring because they let too many people go in April, and because some companies needed to rehire to qualify for PPP forgiveness.

Much more good discussion at the link.

“We are witnessing the easiest phase of growth as people come off temporary layoffs and come back to their employers,” said Harvard University economist Jason Furman, who led the White House Council of Economic Advisers during the Obama presidency. “And once employers are done recalling people, the much harder, longer work of recovery will have to proceed.”

Most economists expected rehiring to kick in as shutdowns were increasingly lifted and people gradually resumed shopping and eating out.

“The surprising thing here is the timing and that it happened as quickly as it did,” said Adam Kamins, senior regional economist at Moody’s Analytics…

Erica Groshen, a labor economist at Cornell University and a former commissioner of the Labor Department’s Bureau of Labor Statistics, said hiring could ramp up relatively quickly in the coming months and reduce unemployment to low double-digits by year’s end.

“Then my inclination is that it will be a long, slow slog,” she said.

Still, a bit of good news for now.