The governor’s office has published the following chart breaking down the state’s four-phase plan for reopening.

Since last Friday, Inslee has announced the easing of some restrictions, including the resumption of existing construction projects and allowing day use activities at state parks and some outdoor recreation like hunting, golfing and fishing to start next Tuesday. Earlier this week, he said some non-urgent surgeries could also resume. The Democrat said the first phase implemented this month would also allow drive-in spiritual services with one household per vehicle.

Inslee said while more outdoor activities will start next week, the ban on large gatherings will remain in effect.

The next phase would allow camping, and new construction, as well as in-store retail purchases, with restrictions. Barber shops and salons could also reopen at that time, and restaurants could reopen at half capacity and table sizes limited to five. The third phase would expand group gatherings to 50 or less, including sports activities, and would allow restaurants to increase capacity to 75 percent. Gyms and movie theaters could reopen at half capacity, but nightclubs and entertainment venues will still remain closed during this phase. During the last phase, most public interactions would resume, with social distancing remaining in place for high-risk populations, with bars, restaurants and entertainment and sporting venues returning to their maximum capacity.

The Seattle Times breaks it down, as well, noting that on the current timetable – assuming all metrics are pointing in the right direction – Phase 4 would begin July 6. The timeline is not fixed, as the Times reports,

Inslee noted that each phase will run for a minimum of three weeks to give officials time to evaluate whether it’s safe to move to the next level. He conceded that it’s possible the four-phase timeline could be accelerated if “we catch some massive break because of climatic conditions or because a cure is found.” But, “We can’t count on that,” Inslee said. 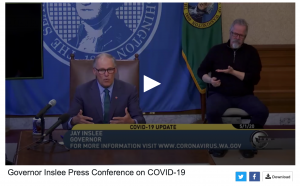 At the news conference, Inslee said some counties with lower numbers of cases and deaths, small populations and sufficient amounts of personal protective equipment and hospital capacity can apply to the Department of Health for a variance so they can move more quickly to the next phase.

“In the next two weeks, the Department of Health and my office will consider additional criteria for allowing other counties to apply for a variance,” Inslee said.

The governor addressed concerns about the slow pace of the reopening, as the AP reports.

Inslee acknowledged the frustrations he’s heard, but said that most Washingtonians “understand that if we stick together for a while longer we won’t lose all the gains that we’ve already made.”