We’ve all heard concern expressed about the “shrinking middle class.” Often the phrase turns up in discussions of “wage stagnation,” income inequality, or economic opportunities lost. Economist Mark Perry has examined the data and concludes the concerns are largely misplaced.

America’s middle class did start largely disappearing in the 1970s, but it was because they were moving up to higher-income groups, not down into a lower-income category. And that movement was so significant that between 1967 and 2018, the share of American households earning incomes above $100,000 more than tripled, from 9.7% to 30.4%. Many prominent people … claim that American’s middle class has been declining, disappearing, collapsing, losing ground, vanished, stagnated, etc. But the Census Bureau data on household income over time displayed above demonstrate conclusively that those assertions are incredibly and verifiably wrong.

He presents three charts, including a dynamic data visualization, to support his conclusion. We’ll post just one of them and urge you to read the short article. 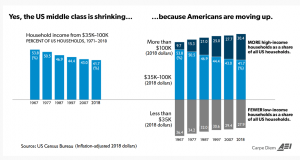 Some of the numbers (emphasis in the original):

Another AEI article examines the data on poverty in the U.S. and finds some important lapses; the news is even better than recently reported.

In their latest report on Income and Poverty in the United States: 2018 released on September 10th, the US Census Bureau reported that, in 2018, the share of Americans living in poverty fell for the fourth consecutive year. According to this latest official government information, 11.8 percent of Americans — including some 38.1 million children, working-age adults, and seniors — had incomes below the official poverty line and were living “in poverty.”

But the official poverty measure (OPM for short) actually ignores more anti-poverty benefits than it counts in determining who is officially “poor” in America, so what this official data leaves out is as important as what it counts. As a result, the OPM has grown increasingly unconnected to reality as it fails to count a rising share of taxpayer assistance provided to aid the poor.

This uncounted taxpayer assistance has been a boon to those on the left and right who seek to exploit the annual poverty data for political purposes. For those on the left, not counting the largest and fastest growing anti-poverty programs has enabled them to call for massive new investments to “lift the remaining millions out of poverty. Similarly, some on the right claim that President Lyndon Johnson’s War on Poverty has been lost, as the official poverty rate remains near 1960s levels despite massive spending on anti-poverty programs. This is the result of OPM’s ignoring the value of more recent anti-poverty programs in determining whether recipients are “poor.”

…An improved count and an understanding of the efficacy of those uncounted programs would help policymakers better judge whether and what additional changes are needed to help more Americans escape poverty.