The roiling controversy over Seattle’s proposed head tax has prompted new consideration over state laws limiting local governments’ tax and regulatory policies. The Senate Republican leader believes the city would be overstepping its taxing authority by adopting a head tax and wants explicitly to preempt such taxes.

These preemption statutes have been considered before here.

About a year ago, the Seattle income tax law inspired the editorial board of The Columbian to endorse state preemption of the tax. (We think existing state law already preempts local income taxes, but a belt-and-suspenders approach can’t hurt.)

In 2016, we wrote of states that preempt local minimum wage laws. About the same time, the Wall Street Journal looked at state efforts to preempt a variety of local labor policies. Commenting on the WSJ editorial, we wrote,

We noted something similar in our foundation report.

In addition to the absolute costs of these measures, and the challenge they create in competing with other employers not subject to the same mandates, local governments’ wage and benefit regulations create compliance problems for employers operating in multiple jurisdictions. They also create difficulties as employers look to align their human resource policies among cities with different mandates. For example, the SeaTac and Seattle sick leave policies have differing provisions.

Now, from a progressive, union-backed advocacy group, we have a handy tool for looking at which states preempt what. Route Fifty reports,

The Partnership for Working Families launched a map detailing state preemption of localities on nine economic and racial justice issues.

A network of 19 regional advocacy organizations, the partnership is tracking state interference in everything from ridesharing to sanctuary cities and nondiscrimination ordinances to the minimum wage.

Only states with laws on the books are included, so users can see that 28 now prohibit localities from setting the minimum wage and 27 ban local rent control.

The interactive map is easy to use. Here’s a screenshot of how Washington looks. 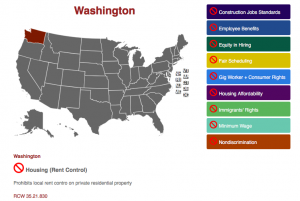 Of the nine, Washington preempts only rent control. We’re not vouching for the accuracy of the data for our state or any of the others. And, we imagine there can be arguments about what’s included in the nine broad issue categories. But clicking around the map, it’s clear Washington preempts much less than other states.