The unofficial-but-all-too-likely estimates are in and it looks like the state could lose $7 billion in forecast revenues over the next four years. While not precise, the numbers suggest the magnitude challenge ahead.

Preliminary numbers show Washington could lose $7 billion in state revenue through 2023 as the coronavirus pandemic takes its toll — making a special legislative session likely to adjust the state’s budget.

Prepared by the Washington Economic and Revenue Forecast Council, the numbers are based on assumptions and come with “substantial uncertainty” given that state tax data isn’t yet available for March and April.

But the unofficial forecast suggests Washington lawmakers will be likely forced to make difficult decisions about how to shore up the state’s current, two-year state operating budget.

Previously we wrote about the ERFC’s “dead letter” budget outlook. These preliminary estimates suggest what we’ll see in June.

The Times reports a special session before January is likely, according to the state budget director.

David Schumacher, director of the state Office of Financial Management, said it was still too early to know the exact economic damage from the coronavirus, but the unofficial forecast “gives us a good first look.”

“I think we all thought that the problem was going to be somewhere in this range,” he said.

While the state has enough reserves to cover some of the shortfall, said Schumacher, lawmakers will have to trim the budget before they return in January.

If past is prologue – and it is, that’s why Shakespeare’s phrase is a commonplace – lawmakers can seek guidance by looking at what the Legislature did during the Great Recession. The Washington Research has been doing just that in a good series on state budget actions taken during the 2008-2012 downturn. Their latest report, the fifth in the series, examines budget cuts. It’s a detailed account of actions taken annually, and we recommend it be read in full. From the intro,

From the 2008 spending high point to 2012 (the last budget with net policy cuts), state spending dropped by 7.1 percent ($2.406 billion). This includes changes to both new policy and maintenance level (the cost of continuing current services) spending.

The policy vs. maintenance distinction is an important one. The budget office defines maintenance level spending this way:

A projected expenditure level representing the estimated cost of providing currently authorized services in the ensuing biennium. It is calculated using current appropriations, the bow wave of legislative intentions assumed in existing appropriations (costs or savings), and adjustments for trends in entitlement caseload/enrollment and other mandatory expenses. This number establishes a theoretical base from which changes are made to create a new budget.

Think of it as the cost of keeping on; it’s largely not discretionary. Changes would require legislative action, and, as we saw in the recent school funding McCleary case, some expenditures are required to satisfy constitutional requirements.

Policy level – changes are where the early action in a downturn will take place. The budget office defines them as:

Incremental expenditures that may represent revised strategies or substantial differences in program direction and can include proposed program reductions. Examples can include discretionary workload expenditures necessary to address workload not defined as mandatory, new programs or changes in the level or scope of existing programs, or program reductions and other changes.

The WRC notes reports on the interplay.

The next chart shows the level of policy cuts in each of the 11 budget bills enacted over the time period. The largest cuts occurred when making original 2009–11 and 2011–13 appropriations. 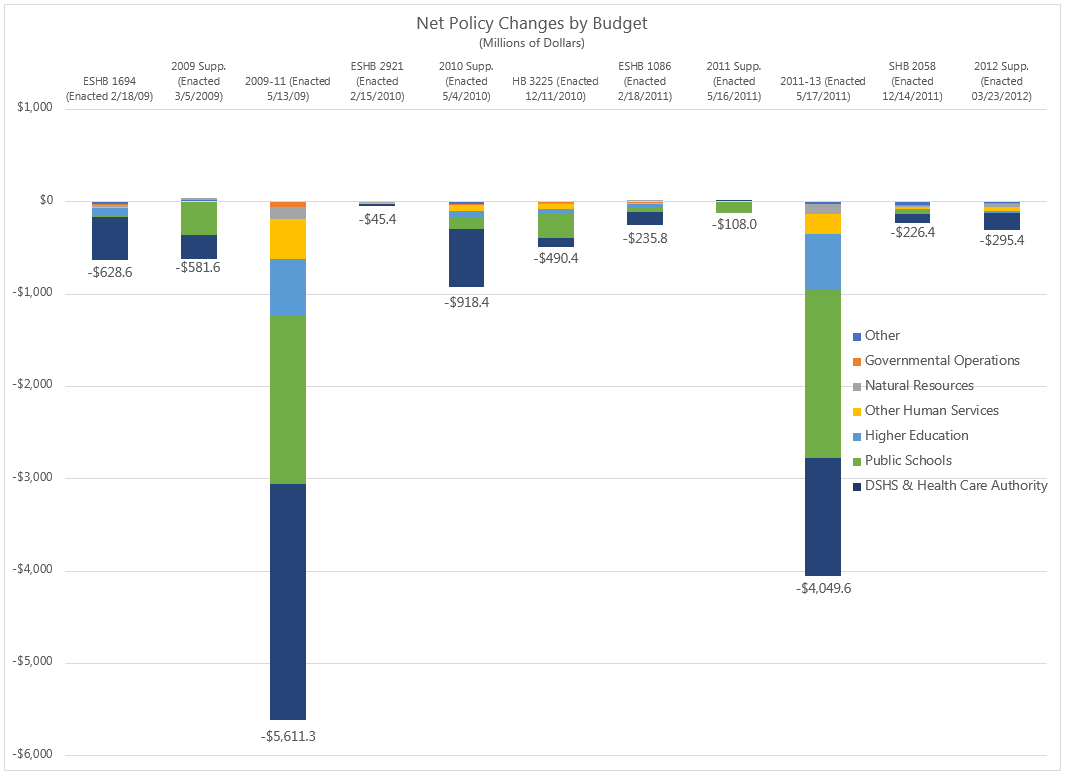 As now, budget writers were able to rely on federal aid to offset some of the revenue loss. But it was only a temporary and partial replacement. As the WRC writes. significant budget reductions were required over a period of several years,

To summarize them: Federal stimulus funds, new fees, higher tuition, and higher local levy limits allowed for reduced state spending over the period. Several rounds of across-the-board cuts were made and efficiencies were found in many budget areas. Employee compensation was reduced. State-funded human service programs were cut (but so were Medicaid programs). Major non-basic education programs were eliminated. The most substantial budget gimmick was a one-day school apportionment shift in 2011.

Although these strategies were used in combination in most of the budget bills over the period, the availability of federal stimulus funds was concentrated in fiscal years 2009, 2010, and 2011. This delayed some service cuts. Stopping planned spending early on (e.g. freezing hiring, delaying program implementations) also helped to delay actual cuts to services.