With the obvious caveat that Oregon is not Washington, today’s June forecast in many ways both mirrors the preliminary forecast for Washington suggesting a $7 billion revenue loss over the next three years and anticipates our state’s official June forecast.  The Oregon Office of Economic Analysis released its estimate today (executive summary, full report, slides) couched in the uncertainty that surrounds predictions during the pandemic. Still,

In one sense, the sudden stop of economic activity due to the outbreak of Covid-19 has made the revenue outlook clearer.  Economists have a particularly difficult time forecasting turning points in the business cycle.  This time around, it became clear overnight that Oregon is in recession and that the downturn will be severe. Recovery will take years…

While this recession is extremely severe – the deepest on record in Oregon with data going back to 1939 – it is expected to be shorter in duration than the Great Recession. The economy should return to health by mid-decade. The reasons for the faster recovery include the fact that there were no major macroeconomic issues or imbalances prior to the virus, much of the initial severity of the recession is due to suppressed economic activity, and the federal policy response, however imperfect, has been swifter and more targeted than in recent cycles.

The following chart shows how different this recession is in Oregon, as in most states. 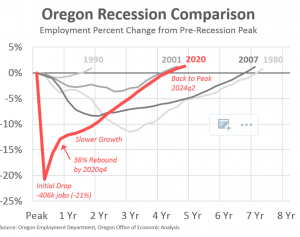 The near-term budget implications are both significant and manageable.

While some taxes will fare better than others, all major revenue sources will face considerable downward pressure given the severity of the recession.  The sudden stop in economic activity has led to the largest downward revision to the quarterly forecast that our office has ever had to make. In the baseline (most likely) scenario, General Fund and other major revenues have been reduced relative to the March forecast by $2.7 billion in the current biennium and $4.4 billion in the 2021-23 budget period.

Fortunately, Oregon is better positioned than ever before to weather a revenue downturn.  Automatic deposits into the Rainy Day Fund and Education Stability Fund have added up over the decade-long economic expansion, and stood at $1.6 billion in April. In addition to dedicated reserve funds, the General Fund had over one billion dollars in projected balances before the recession hit.

Oregon will share some of the pain felt by sales tax states since our revenue system has become much more dependent on consumer and business spending over time.  Even before the corporate activity tax was enacted in 2019, a wide range of sales-based taxes had been expanded in recent years.  Taxes on lodging, gasoline, vehicle purchases, video lottery and marijuana sales are all much more substantial than they were during the last recession.

While we’re looking to our southern neighbor, this picture of job losses is another reminder of the speed at which the economy shut down. 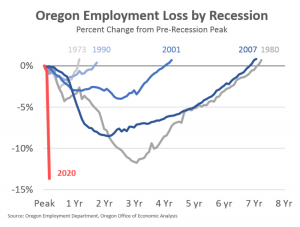 In a joint appearance before the Senate Banking Committee, Treasury Secretary Steven Mnuchin and the Fed chair, Jerome Powell, offered an assessment of the fragile state of the economy. But they offered divergent views about how to mitigate the economic hit from a virus that has shuttered significant amounts of business activity and has already thrown more than 20 million people out of work.

Mnuchin, who acknowledged a painful month ahead, suggested that an expeditious reopening of states was the key to preventing irreversible economic devastation.

“There is the risk of permanent damage” if states delay their reopenings, Mnuchin told lawmakers. While the Treasury secretary said job losses would get “worse before they get better,” he suggested that conditions would “improve in the third and fourth quarters” as states began reopening and business activity resumed.

Powell sounded a more cautious tone, saying a full recovery would not take hold until the health crisis was resolved and people felt safe resuming normal activity. He suggested that Congress, the White House and the Fed itself might need to provide more help to carry states, households and businesses through the pandemic.

Uncertainty will likely continue to cloud predictions for some time to come.