U.S. employment grew modestly in August and unemployment showed signs of stabilizing at historically low levels, signs that a global economic slowdown isn’t driving the U.S. into outright recession but has dented the growth outlook.

The U.S. economy added 130,000 payrolls in August, the Labor Department reported Friday, and has averaged 156,000 new jobs a month over the past three. That was down from average growth of 190,000 a month in the eight years since employment started picking up after the last recession. The August number was propped up in part by the addition of 25,000 temporary Census workers by the U.S. government, while estimates of payrolls in July and June were revised down.

The headline jobs number at 105 thousand for August ex-Census (130K total including temp Census hires) was well below consensus expectations of 158 thousand, and the previous two months were revised down 20 thousand, combined. The unemployment rate was unchanged at 3.7%. There was good news with the increase in the participation rate and employment-population ratio. But overall this was a disappointing employment report.

The numbers were also well below the ADP estimate of 195,000 jobs excluding government employment.

CR also reports GDP forecasts for Q3 are coming in below 2 percent.

Productivity for the second quarter increased 2.3 percent, up but slowing. More worrisome is the decline in manufacturing productivity.

U.S. worker productivity slowed in the second quarter, the government confirmed on Thursday, as productivity in the manufacturing sector declined by the most in nearly two years.

The Labor Department said nonfarm productivity, which measures hourly output per worker, increased at an unrevised 2.3% annualized rate in the last quarter.

Bringing some of this down to our state’s economy, the Economic and Revenue Forecast Council met yesterday. The Washington Research Council reports,

The economic review (beginning on page 19 of the pdf) notes that the preliminary economic forecast for Washington is “very similar” to the June forecast and that downside risks continue to include “uncertainty regarding trade policy.” 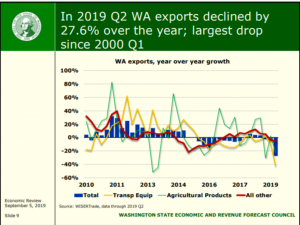 Policy matters. And so far trade conflicts have taken a major toll on the state economy. A good overview of the economic situation (pdf here), global and national, from Bruce Yandle at the Mercatus Center, then offers some reason for optimism going into 2020.

First, he puts the current economy in context.

…the US economy, much like that of the rest of the developed world, began to slow significantly in late 2018 and at the start of 2019. While consumer spending continued to show remarkable strength, employment growth, US industrial production, and exports weakened. The Trump administration’s escalating trade war with China, threats of tariffs on Mexican imports, and additional tariff threats on European autos and even French wine raised uncertainty across the manufacturing sector. The negative effects generated by trade war uncertainties were reinforced by debates regarding reversals of Federal Reserve (Fed) interest rate policies along with the possibility of another government shutdown in association with congressional debate regarding raising the nation’s debt limit. By late July, the Fed and debt limit uncertainties were resolved when the Fed reduced interest rates by a mild 25 basis points at its July meeting and Congress passed a two-year budget bill that eliminated the risk of government shutdown. Meanwhile, trade war uncertainties and a slowing industrial economy remained in place.

The effects of these uncertainties are seen in the slowing growth in industrial production, where the year-over-year growth rate peaked in September 2018 and has diminished almost every month since then.

So, is a recession in the offing?

Will we see a recession—two consecutive months of negative real GDP growth—in the next 12 months? Based on what we know now, I think not. The normal election year incentives create a push to more deficit spending, less confrontational trade talk, and continued regulation relaxation, which should be enough to generate greater than two percent real GDP growth in the year ahead.

Granted, an odd kind of optimism. A recession, in this scenario, amounts to an unforced error, an economic own goal. We should be able to avoid it.