The Seattle Times reports the state Employment Security Department is warning of a major increase in UI taxes in the wake of the pandemic. (We do hope to see the pandemic in the rear-view mirror sometime soon.)

By 2022, taxes that employers pay to cover state jobless benefits could rise to an average of $936 per worker. That’s almost three times the expected 2020 figure of $317, according to preliminary figures released Thursday by the state Employment Security Department (ESD).

And those are average increases: Employers who had more layoffs could see higher per-employee taxes.

The tax hikes are needed to replenish the state unemployment trust fund, which has fallen from $4.7 billion to $2.8 billion since March 1 after paying out benefits to so many laid-off workers. A new state forecast shows the fund will likely be insolvent by early 2021 , which will require the state to borrow federal funds to cover any shortfall.

This chart from the Times story tells the tale. Notice how long rates remain elevated. 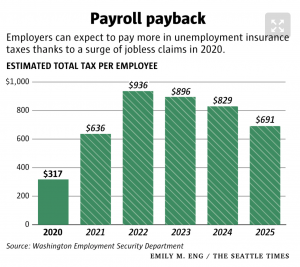 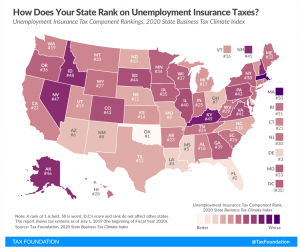 Writing of the steep rise in UI claims and the toll taken on state trust funds, the Tax Foundation writes,

As more firms lay off employees and unemployment increases, states’ unemployment insurance taxes will rise on businesses that can least afford to pay. As states receive federal assistance to aid with unemployment benefits, it may be appropriate to provide some measure of relief to businesses as well, particularly to the extent that their layoffs were precipitated by business closure orders.

Nick Demerice, ESD spokesman, cautioned that Thursday’s forecast is preliminary. The actual tax increases will depend in part on future economic conditions: A faster than expected recovery could mean workers come back to to work sooner and withdraw less from the trust fund.

Likewise, changes in government policy, such as new federal grants for depleted state trust funds, could reduce the amount Washington needs to generate in new taxes.

“There’s a number of different factors and variables that could change dramatically, which would change this [forecast] modeling,” Demerice said, adding that the state expects to have a clearer picture when it begins applying for federal loans in August or September.

So, yes, preliminary and tentative. But the implications loom large.

The new projections will be unwelcome news for employers already struggling with dramatic declines in revenue during the pandemic.

“It’s huge,” said Elizabeth Reed, co-owner of Interface Technologies Northwest, a Lynnwood-based installer of commercial telecommunications systems, when told of the increases. “I understand we have to pay for what just happened, but you’re hitting employers for something that they had no control over.”

Expect a lot of discussion of this in the next few months..