Housing affordability is directly affected by public policy, particularly regulatory burdens. In an opinion piece in The Lens, Greg Lane, executive vice president of the Building Industry Association of Washington, takes a close look at the role played by the State Environmental Protection Act (SEPA).

He finds an unusual ally in identifying abuses of the SEPA process.

Members of the Seattle City Council have been accused of trying to “…gut bedrock environmental protection rules…” because they state what has been obvious to many stakeholders all along—the State Environmental Policy Act (SEPA) is used as a tool to delay or derail projects. While Council Member Mike O’Brien’s proposed ordinance is far from perfect, it’s fundamental intention is critical in addressing housing affordability and access.

Lane writes that environmental protection is one of the goals of the state Growth Management Act. He writes,

Progress means our communities need to embrace new neighbors and new neighborhoods – housing is a positive value for Washington. The state can lead on this in 2020 by taking up and reforming the repetitiveness of our land use planning. For example, it is long past time for integration of GMA and SEPA.

Jurisdictions across the state spend millions creating comprehensive plans through a robust public process that designates where and how growth is to happen. At the very least, residential construction that is consistent with that underlying comprehensive plan should be categorically exempt from SEPA. The local government has already done a sizable and appropriate land use and environmental review and taken into consideration public input, it’s time to allow what they’ve planned for and avoid appeals to new neighbors.

In our 2017 foundation plan, we cited the role of SEPA regulation in delaying or derailing industrial development, while also reporting on land use regulation as a factor in driving up the cost of housing and limiting availability.

A recent Washington Research Council (WRC) analysis finds that “the expanded SEPA and associated political activism have resulted in permitting delays, project cancellations, and even outright bans of projects involving certain commodities. This negatively impacts the communities involved that would have benefited from increased jobs and tax revenues.”

Excessive regulation also restricts the supply of housing and raises its cost. For example, in the San Francisco Bay area, growth has slowed due to high housing costs and lack
of housing supply.We can avoid the outrageous housing prices of the Bay area by paying close attention to the impact of our state’s land use regulation.

As Lane writes, the costs are not trivial.

Higher home prices impact access to attainable housing and homeownership. In Washington state, the median new home price is $505,729, well beyond the means of the annual income of the average working family. For every $1,000 increase in price, 2,393 people are priced out of the market. The National Association of Home Builders estimates that the price of a new home, 25% or more, is directly tied to regulation, permitting and other fees.

KUOW takes a look at how Seattle’s housing crisis is affecting middle-income workers.

Seattle’s soaring housing prices are forcing some low-income families into homelessness, and that’s still the city’s main priority. But according to the new report, nearly 40 percent of middle-income workers like hospital staff and teachers also say housing costs are a “burden.”

One of the top recommendations will be familiar to many of us.

KUOW notes businesses are already doing a lot to help address the problem.

Microsoft recently pledged $250 million on top of the $500 million the company announced last year to help finance solutions to the state’s affordable housing crisis. That news follows Apple, Facebook, and Google pledging a combined $4.5 billion to help ease the workforce housing crunch down in California.

Aaron Renn, with the Manhattan Institute, has released a new report focusing on the growth opportunities for super-star cities, including Seattle. Again, regulation plays a central role in limiting housing access. Table 1, pasted in below, provides one measure of Seattle’s affordability. 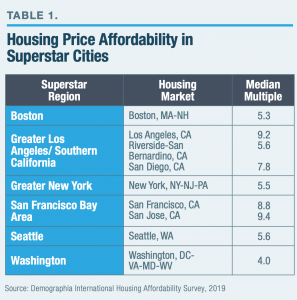 Housing prices also remain high in superstar cities. The Demographia International Housing Affordabil- ity Survey10 classifies metropolitan-area home afford- ability by median multiple, a price-to-income ratio in which the median home price is divided by the median household income in a region. A ratio exceeding 3 is considered unaffordable. As shown in Table 1, the super-star cities far exceed that, except for Washington, D.C.

It’s a very good, relatively brief, analysis. We recommend it. One recommendation:

The regulatory burden on real-estate development needs to be significantly lightened in superstar cities, which impose some of the greatest regulatory burdens of anywhere in the country. Although it is difficult to measure land-use regulation across jurisdictions, a good estimate comes from the Wharton Residential Land Use Regulatory Index,22 which calculated a single numeric index based on several land-use regulatory components for 47 housing markets in the United States. The higher the index value, the more restrictive the land-use regulations. These markets do not equate 1:1 with superstar regions in this report, but Table 4 lists the rankings for all available submarkets.

Cities, counties and the state need to look for more opportunities to synchronize the coral reef of regulation that residential permits (you know, permits that mean additional housing units for the people of Washington) are subject to. We need to take a hard look at best practices in our planning and avoid repetitive regulatory schemes and look for how Washington can attract development in both rural and urban communities.