Payroll processor ADP reports that nationally employers added 428,000 jobs. According to the firm,

…the ADP National Employment Report is produced by the ADP Research Institute® in collaboration with Moody’s Analytics. The report, which is derived from ADP’s actual payroll data, measures the change in total nonfarm private employment each month on a seasonally-adjusted basis.

As this section of the ADP infographic shows, most of the hiring was by large employers. 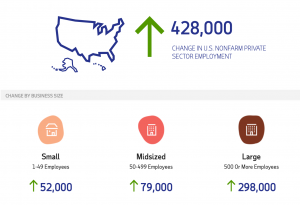 “Given the enormous job losses during the Viral Recession, job growth of around 400,000 per month means that it would take years for the labor market to recover from the coronavirus pandemic,” Gus Faucher, an economist at PNC, said.

Friday, the federal government will release its jobs report, which includes government workers and often differs from the ADP numbers. The AP writes,

Economists forecast that the Labor Department on Friday will report that 1.4 million jobs were added in August, while the unemployment rate is expected to have fallen to 9.8% from 10.2%, according to data provider FactSet.