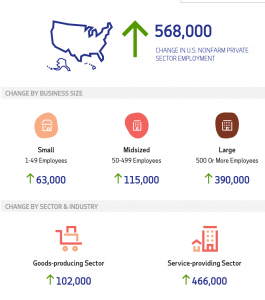 Private sector employment increased by 568,000 jobs from August to September according to the September ADP® National Employment ReportTM. Broadly distributed to the public each month, free of charge, the ADP National Employment Report is produced by the ADP Research Institute® in collaboration with Moody’s Analytics. The report, which is derived from ADP’s actual data of those who are on a company’s payroll, measures the change in total nonfarm private employment each month on a seasonally-adjusted basis.

The pandemic remains heavily involved in the recovery, but ADP is bullish.

“The labor market recovery continues to make progress despite a marked slowdown from the 748,000 job pace in the second quarter,” said Nela Richardson, chief economist, ADP. “Leisure and hospitality remains one of the biggest beneficiaries to the recovery, yet hiring is still heavily impacted by the trajectory of the pandemic, especially for small firms. Current bottlenecks in hiring should fade as the health conditions tied to the COVID-19 variant continue to improve, setting the stage for solid job gains in the coming months.”

The segment of the ADP infographic we’ve pasted in above shows most of the job growth is in large companies and in the services sector. Last month, remember, ADP reported a disappointing 374,000 new jobs. That report preceded the Department of Labor’s dismal jobs report for August, which showed just 235,000 new jobs.

This was well above the consensus forecast of 430,000 for this report.

The BLS report will be released Friday, and the consensus is for 460 thousand non-farm payroll jobs added in September. The ADP report has not been very useful in predicting the BLS report.