Payroll processor ADP reports another positive jump in private sector employment in the past month.

Private sector employment increased by 749,000 jobs from August to September according to the September ADP National Employment Report®. 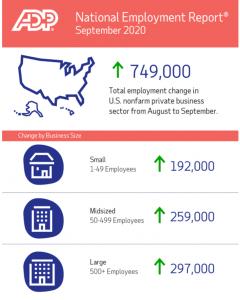 This was above the consensus forecast for 605 thousand private sector jobs added in the ADP report.

The BLS report will be released Friday, and the consensus is for 850 thousand non-farm payroll jobs added in September. Of course the ADP report has not been very useful in predicting the BLS report

The BLS report will also include public sector jobs. The pattern reported by ADP is interesting. The Street reports,

The ADP’s national employment report show U.S. employment grew by 749,000 in September, a figure that came in well ahead of the Street consensus forecast of 650,000 and was also firmly in front of last month’s upwardly-revised tally of 481,000…

“The labor market continues to recover gradually,” said Ahu Yildirmaz, vice president and co-head of the ADP Research Institute. “In September, the majority of sectors and company sizes experienced gains with trade, transportation and utilities; and manufacturing leading the way. However, small businesses continued to demonstrate slower growth.”

As states continue to open up, albeit cautiously and unevenly, employment should continue to grow. The Washington Research Council reports here on how, like Washington, many states are also experiencing better-than-expected revenue growth as the pandemic enters its seventh month. One threat to the recovery may come from an increase in taxes on businesses and households struggling to rebuild. The WRC writes,

Given the new debt estimates, Howard Gleckman of the Tax Policy Center (a joint venture of the Urban Institute and Brookings Institution) expects that “in the medium term, federal taxes are going to rise as the nation is forced to address an ever-growing national debt.” Such tax increases, if they come to pass, would be on top of already increasing state and local taxes in Washington.

Just as state and local officials are (generally) being judicious in allowing businesses to reopen, we would hope they would be similarly cautious in imposing new tax burdens on employers working to restart and expand their operations.