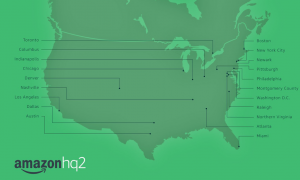 And then there were … 20! As Bloomberg News reports, Amazon has released its “very long short list” of cities still being considered for HQ2. Amazon describes HQ2 as

Amazon’s second headquarters in North America. We expect to invest over $5 billion in construction and grow this second headquarters to include as many as 50,000 high-paying jobs – it will be a full equal to our current campus in Seattle. In addition to Amazon’s direct hiring and investment, construction and ongoing operation of Amazon HQ2 is expected to create tens of thousands of additional jobs and tens of billions of dollars in additional investment in the surrounding community.

The company culled the list from 238 to 20. Here’s the firm’s statement on “next steps.”

In the coming months, Amazon will work with each of the candidate locations to dive deeper into their proposals, request additional information as necessary, and evaluate the feasibility of a future partnership that can accommodate our hiring plans as well as benefit our employees and the local community. We expect to make a decision in 2018.

GeekWire comments on the geography and politics of the final 20.

Los Angeles is the only West Coast representative on the list of 20 cities, which is concentrated heavily in the Midwest and the Northeast. No cities from the Pacific Northwest made the cut, confirming that Amazon is focusing on other parts of the country to differentiate from its longtime home in Seattle. This is despite bids by the economic development officials in the Seattle region, Tacoma and Portland in the Pacific Northwest.

Toronto is the only city on the list in Canada. Three of the finalists are in the Washington, D.C., area. Two Texas cities, Austin and Dallas, made the list. New York City and Newark are another notable cluster.

The top 20 are split almost evenly along political lines. Ten locations are in red states from the 2016 election, versus nine in blue territory.

We wrote of the several bids submitted by cities in Washington. While another Washington-based headquarters seemed like a stretch, the opportunity for policymakers to consider their competitive position should have benefits beyond the HQ2 decision, a chance to understand better what makes a place “business friendly.”

The speculation [about where HQ2 ends up], however, is less interesting than the introspection occurring in Washington. Much of it is the kind of thing we’ve been writing about since Opportunity Washington launched several years ago. What makes a region desirable for investment and job creation? What policies promote shared prosperity? How do we expand opportunity in our state? We’ve offered ideas, framed by our priorities: Achieve (education), Connect(transportation), Employ (regulatory and tax environment).

The fundamentals still matter… Competition sharpens everyone’s game. And Amazon has reminded the state that, with all the advantages Washington and metro Seattle provide, we still must compete.

That hasn’t changed, despite our not making the short list.