This graph from a recent Gallup poll tells the story. The year got off to a rough start. 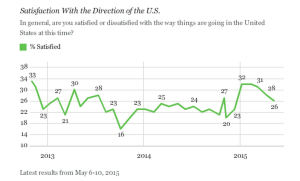 The Hill reports on the survey.

Twenty-six percent of Americans are satisfied with the direction of the country, according to Gallup, returning to levels around the end of 2014, before a sharp 9-percentage-point uptick in satisfaction heading into the new year.

Satisfaction jumped nine points in January to 32%, a promising sign that Americans’ moods were improving after a year of lower figures throughout 2014, ranging between 20% and 27%. Since February, though, satisfaction has dipped only slightly each month, but these small drops have resulted in a six-point decline since the beginning of the year. Satisfaction remains below the 36% historical average for Gallup’s trend dating back to 1979.

The drop in Americans’ satisfaction with the way things are going parallels the recent decline in economic confidence. Americans had a more positive outlook on the economy at the dawn of 2015, but these views, like satisfaction, have edged down in recent months.

The top three – government, the economy and unemployment – have been frustratingly stable.

Ahough the 14% of Americans who name dissatisfaction with government, Congress and politicians as the top problem facing the U.S. has fallen five points since April, it still remains the most commonly mentioned problem — a distinction it has held for six months.

Another cautionary, though less so, survey comes from the National Association of Home Builders.

Builder confidence in the market for newly built, single-family homes in May dropped two points to a level of 54 on the National Association of Home Builders/Wells Fargo Housing Market Index (HMI) released today. It is a nine-point increase from the May 2014 reading of 45.

“Consumers are exhibiting caution, and want to be on more stable financial footing before purchasing a home,” said NAHB Chief Economist David Crowe.

Our friends in the South feel a little better.

Twenty-six percent of respondents expect their business’ revenues to increase by 30 percent or more this year compared to 2014, according to a new survey by Investment Banking South. The survey, conducted in April 2015, polled 338 business owners, investors and corporate advisers in Tennessee, Alabama, Florida, Georgia, Mississippi, North Carolina and South Carolina.

Manufacturing is attracting a lot of interest.

More than half — 56 percent — of the manufacturers surveyed in eight southern states said they are getting more calls from private equity groups this year than last year. About 36 percent of non-manufacturing businesses are seeing an increase in private equity interest.

Investors agree, with 89 percent of the investors surveyed ranking manufacturing as the industry they are most likely to target.

The signal the Gallup poll sends may serve to keep expectations in check. It may even exert a subtle influence on how exuberant revenue forecasters will  be. Uncertainty always contributes to conservative projections.

But Washington can still be home to great opportunity. Legislators in Olympia can resolve their differences by adopting a sustainable budget that satisfies the need to boost state education funding and protect vital services, passing a comprehensive transportation package, and avoiding tax and regulatory policies that dampen investment and job creation.