The Near General Fund-State (Near GF-S) revenue forecast for the 2017-19 biennium is decreased by $47 million, and revenue for the 2019-21 biennium has increased by $432 million. The Near GF-S includes the General Fund-State, Education Legacy Trust Account and Washington Opportunity Pathways Account and provides the fullest picture of resources available for budget purposes. Legislative changes were responsible for the bulk of the forecasted increase in 2019-21, adding $330 million in revenue…

The level of uncertainty in the baseline remains elevated, with downside risks outweighing upside risks.

Federal Reserve Chairman Jerome Powell said Tuesday the economic outlook has become cloudier since early May, with rising uncertainties over trade and global growth causing the central bank to reassess its next move on interest rates.

Speaking to the Council on Foreign Relations in New York, Powell said the Fed is now grappling with the question of whether those uncertainties will continue to weigh on the outlook and require action.

Washington continues to do well, writes the Association of Washington Business.

The ERFC forecast says, “Washington’s economy is continuing to outperform the nation but not as dramatically as in past.” 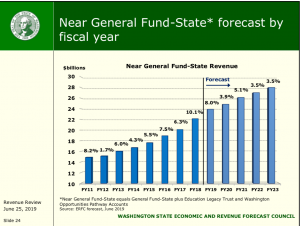 We commented on the trend in yesterday’s post, pointing out that Washington’s budget growth stood out among U.S. states.

The ERFC also provides some caution in its commentary, including the familiar concern:

Major threats to the U.S. and Washington economies remain, including international trade concerns, geopolitical risks and a maturing economic expansion.

We’d also note that, expansive as the NGFS+ outlook is, it does not capture all the taxes increased by lawmakers. For a more complete overview, see the Washington Research Council publication, Despite Substantial Recent Revenue Growth, Legislature Increases Taxes by Over $1 Billion.