A new analysis by the Washington Research Council demonstrates the volatility of a graduated real estate excise tax as is currently being considered in Olympia.

The 2019-21 operating budgets passed by the House and the Senate both assume more revenue than is forecasted to be available from current sources. In both cases, budget writers suggest that part of the gap be filled by replacing the current flat rate (1.28 percent) Real Estate Excise Tax (REET) with a graduated rate structure. This would reduce the tax paid on lower valued properties, increase the tax paid on higher valued properties and raise more revenue overall. The existing REET is a volatile tax; a graduated REET would be even more volatile.

The WRC compared the volatility of the REET with that of the retail sales tax in a series of charts, one of which is shown below. 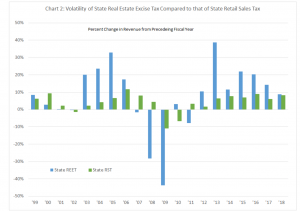 Exacerbating the problem of volatility, neither graduated REET proposal fully directs its revenue to the general fund, where it would be counted as general state revenue and thus be subject to the constitutional provisions regarding transfers to the BSA. The House bill directs 55.5 percent of the additional revenue generated by its graduated REET to the Education Legacy Trust Account (ELTA), where it would not count as general state revenue. The Senate bill directs about 90 percent of the additional revenue to ELTA. These proposals would make the state’s general fund less sustainable for the future.

The WRC previous pointed out that another revenue source under consideration, the capital gains tax, would pose a similar sustainability problem.