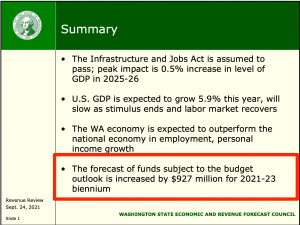 The September revenue forecast adopted by the Economic and Revenue Forecast Council again increased projected tax collections. And, as the summary slide above shows, the increase is substantial: $927 million.

Some takeaways from the revenue notebook:

Inflation and COVID are threats.

And, overall, the state has a whole lot more money to spend, save, or give back in tax reductions.

Steve Lerch, the chief economist and executive director of the council, noted that since the last update there has been improvement in employment numbers, both nationally and in the state, and that the residential real estate market remains strong. Downsides include higher inflation, rising COVID-19 cases and ongoing supply chain issues.

At its quarterly meeting today, the state Economic and Revenue Forecast Council (ERFC) updated its forecasts of state revenues. These new forecasts add more than $1.8 billion to the amount available over the current biennium and next bienniums…

We anticipate tax talk should be muted in the upcoming short 2022 legislative session, but there may yet be more scrambling to further increase spending. The temptation should be resisted.