“We urge voters to reject I-976,” writes the Walla Walla Union-Bulletin editorial board. The editorial makes clear the reasons. After acknowledging that much, but not all, of the impact on transit funding would hit the Puget Sound region, the writers explain the statewide importance of preserving the funding I-976 would gut.

The reality is that the transportation of goods across the state is critical to everyone. Having a solid transportation system benefits the entire state and all its residents.

If the folks in King, Pierce and Snohomish county voted to tax themselves for this project, it’s wrong to undercut their decision.

Beyond that, a significant amount of the money collected from the annual license tab fees is used for transportation projects in Eastern Washington, including upgrading the infrastructure of Walla Walla County.

A dramatic cut in transportation funding statewide and locally is simply not acceptable.

Underscoring the transportation problems that I-976 threatens to make worse is a new study from the Texas A&M Transportation Institute. The Urban Mobility Report 2019 report finds metro Seattle commuters face an annual delay of 78 hours as a result traffic congestion. Here’s the dashboard from the Seattle page of the report. 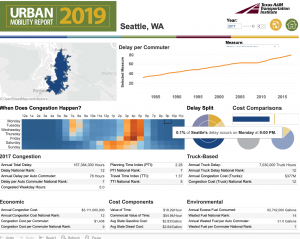 Ryan Blethen reports on the study in the Seattle Times.

The average driver in Seattle spent more time sitting in traffic in 2017 — the most recent year for which data is available — than their counterparts in almost any other city, according to the 2019 Urban Mobility Report by Texas A&M University’s Transportation Institute. Seattle ranked seventh on this metric among large urban areas, behind Los Angeles; San Francisco; Washington D.C.; New York City; San Jose, California; and Boston…

Some numbers Seattle commuters can stew on while staring at a sea of brake lights:

Consider those high costs the cost of failing to address infrastructure and transit funding. In Washington, voters, legislators and local governments have adopted funding strategies to reduce congestion, facilitate mobility, and improve safety. I-976 puts that all at risk.

More news on the initiative in the Spokesman-Review and The News Tribune.

See also our most recent post on the initiative.