This update, of course, follows the September forecast that halved projected revenue losses through the 2021-2023 biennium. As the chart below shows, receipts are approaching trend. 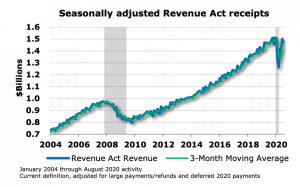 The update points to some strengths in the state economy.

Employment continued to rise in September following the historic decline in March and April. Total nonfarm payroll employment rose 4,600 (seasonally adjusted) in September which was 13,100 less than expected in the September forecast. As of September, the state’s economy has recovered nearly half the jobs lost in March and April. Private services-providing sectors added 11,500 jobs in September. The manufacturing sector lost 1,500 jobs of which 500 were aerospace jobs. Construction employment increased by 2,400. Federal government employment decreased by 3,900 however 2,300 of those were temporary Census jobs. State and local government payrolls declined by 3,900 jobs in September.

Washington’s unemployment rate declined to 7.8% in September from 8.4% in August. The September rate is down significantly from the 16.3% rate reached in April which was an all-time high in the series that dates back to 1976.

In September, after the forecast was complete, the U.S. Department of Commerce, Bureau of Economic Analysis (BEA) released state personal income estimates for the second quarter of 2020. According to these estimates, Washington personal income rose from $506.5 billion (SAAR) in the first quarter of 2020 to $546.0 billion in the second quarter of 2020. The reported 35.1% growth rate (SAAR) in Washington personal income was the 24th largest among the states and District of Columbia and slightly exceeded the 34.2% growth rate for the U.S. as a whole. The income growth in the second quarter was extraordinary, especially considering the sharp contraction in economic activity. Washington personal income from net earnings (wages and salaries plus employer-provided benefits plus proprietors’ income less contributions for government social insurance plus an adjustment for residence) declined at a 25.1% rate (SAAR) and income from property (dividends, interest, and rent) declined at a 9.6% rate. However personal current transfer receipts, boosted by the CARES Act, soared at a 1,260.4% rate (SAAR).

As a result, increased transfer payments far outweighed the decline in net earnings and property income in the second quarter.

Transfer payments don’t build an economy, but they do sustain personal consumption. The absence of another tranche of federal assistance remains a concern.