Revenue collections have been on a sustained upward trajectory since 2010, as the ERFC chart below shows. 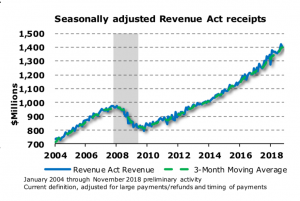 As always, the monthly update provides a lot of good information about the state and U.S. economies, clearly and concisely presented.

Also, this seems like a good time to again cite the Washington Research Council’s report on state spending, underscoring that the revenue trajectory has been matched (if not exceeded) by escalating expenditures.

From the pre-recession peak in 2008 through 2019, spending from funds subject to the outlook (NGFO) is budgeted to increase 43.9 percent. Washington’s state and local spending per capita has exceeded the national average in most years since 2000 and ranked 15th highest in 2016. From 2016 through 2021 (the end of the second biennium of the current four-year budget window), NGFO spending is projected to increase by 40.3 percent…

The WRC tax analysis is a good companion piece to the budget report.

Washington’s recent revenue growth has been strong by national standards. Indeed, Washington’s state and local tax growth from 2015 to 2016 was the nation’s highest.

Similarly, state revenue growth in Washington has outpaced the nation since 2015, and it ranked 10th highest among the states in 2017.  Other states have not performed as well. Adjusted for inflation, revenues in 16 states have still not recovered to their pre-recession peaks . [Citations omitted.]

The Washington Roundtable notes the tax and spending growth in its 2019 Policy Agenda and cautions:

A pattern of dramatic spending growth without a commensurate commitment to strong reserves will put Washington in a precarious position when the economy slows. It is important that state leaders act to ensure fiscal stability, promote job creation, and foster growth statewide.