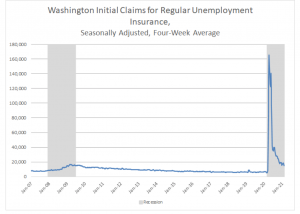 As the state re-opens, we expect hiring to resume and UI claims to fall.