The Washington Research Council continues to do an excellent job of examine how governor’s and legislators have responded to past recessions, with the goal of learning lessons that will help guide us through the eventual recovery. For example, this post provides a timeline and data series for actions taken before and during the Great Recession. (By the way, doesn’t that seem like a very long time ago?)

Before the Great Recession, actual spending in the 2005–07 biennium increased by 17.6 percent over 2003–05 and the original 2007–09 budget increased spending by 10.8 percent. State revenues began to drop in the November 2007 revenue forecast, but as I noted in the first part of this series, it was a slow drip. During the regular 2008 legislative session, the Legislature increased 2007–09 policy level spending by $101.9 million. Appropriations in the 2008 supplemental were $33.655 billion (11.8 percent higher than 2005–07), which turned out to be the state’s pre-recession spending high point.

Read the post for more detail. This pie chart succinctly summarizes the budget actions taken. Not an easy time. 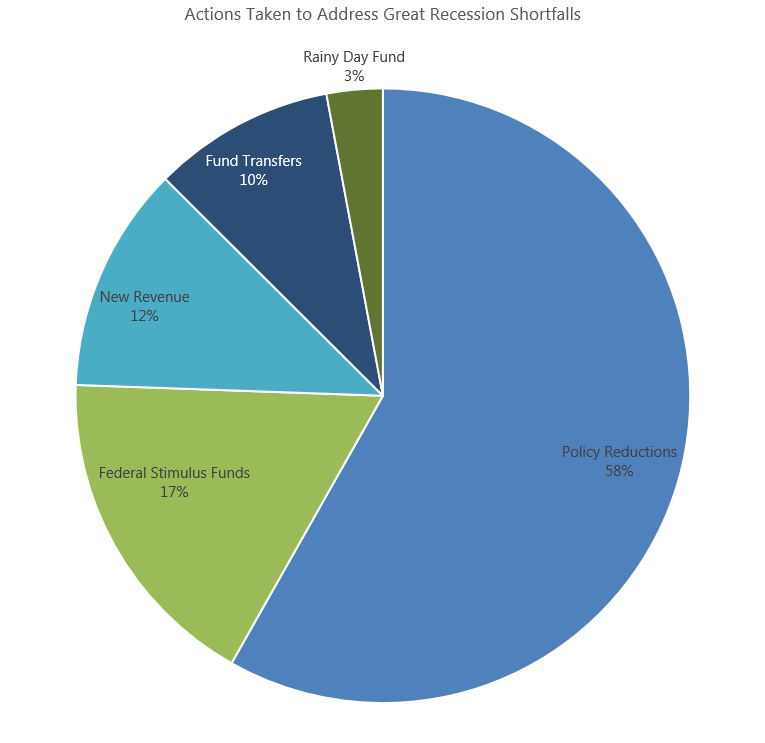 WRC analyst Emily Makings also points out that the public health crisis will likely drive up the state’s Medicaid costs.

She concludes the estimates are imprecise, adding:

Still, it is certain that these possible changes to how Washington residents are insured (especially the increases in Medicaid clients) would have a big impact on the state budget.

Fortunately, Gov. Inslee and the governors of Oregon and California are planning a coordinated economic reopening. The Seattle Times reports.

Inslee said the three states were working together on a two-part process that will determine how best to reopen society even as the global pandemic rages.

The first part of the process, according to the governor, is to use data to make sure the states are safe enough to open. That data will include rates of infections and fatalities, the infection rate per capita, the number of hospitalizations of people with COVID-19-like symptoms and the percentages of positive tests.

“The rate of infection has to be low enough that we know that it’s not going to simply rebound,” he said.

After those numbers look good enough, Inslee said, the second part would kick in: ensuring there are enough test kits and having enough staff who can trace the contacts of those newly infected to quickly contain any outbreak.

The story makes clear the agreement is nonbonding and there are many detail yet to be sorted. Still, even the best case scenario for recovery does not eliminate the fact that the state budget will, in the short term, take a hard it.