Despite the surprising speed of recovery early on, we are still very far from a strong labor market whose benefits are broadly shared. Employment in January of this year was nearly 10 million below its February 2020 level, a greater shortfall than the worst of the Great Recession’s aftermath (figure 5).

After rising to 14.8 percent in April of last year, the published unemployment rate has fallen relatively swiftly, reaching 6.3 percent in January. But published unemployment rates during COVID have dramatically understated the deterioration in the labor market. Most importantly, the pandemic has led to the largest 12-month decline in labor force participation since at least 1948.5 Fear of the virus and the disappearance of employment opportunities in the sectors most affected by it, such as restaurants, hotels, and entertainment venues, have led many to withdraw from the workforce. At the same time, virtual schooling has forced many parents to leave the work force to provide all-day care for their children. All told, nearly 5 million people say the pandemic prevented them from looking for work in January. In addition, the Bureau of Labor Statistics reports that many unemployed individuals have been misclassified as employed. Correcting this misclassification and counting those who have left the labor force since last February as unemployed would boost the unemployment rate to close to 10 percent in January (figure 6). 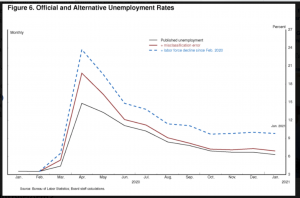 In the relatively short speech, which should be read in full, he traces some recent history and outlines actions contemplated by the Fed. He concludes,

Given the number of people who have lost their jobs and the likelihood that some will struggle to find work in the post-pandemic economy, achieving and sustaining maximum employment will require more than supportive monetary policy. It will require a society-wide commitment, with contributions from across government and the private sector. The potential benefits of investing in our nation’s workforce are immense. Steady employment provides more than a regular paycheck. It also bestows a sense of purpose, improves mental health, increases lifespans, and benefits workers and their families.16 I am confident that with our collective efforts across the government and the private sector, our nation will make sustained progress toward our national goal of maximum employment.