This may be the biggest walkout day of the spring. The Seattle Times reports,

Seattle Public Schools teachers are scheduled to march from Seattle Center at about 11 a.m. to a rally at Westlake Plaza. Teachers in the Issaquah and Mercer Island school districts will join the protest. Classes in all three districts are canceled.

That brings the total to…

Nearly 60 teachers unions have held or have agreed to hold similar one-day walkouts across the state, according to the Washington Education Association.

The Seattle Times editorial board thinks the walkouts are a bad idea. So does the Tri-City Herald. And at least one teacher who takes to the op-ed page of The News Tribune.

To put this all in context, we suggest you review this brief staff presentation to the State Board of Education reviewing the House and Senate education budgets. Here’s one slide from the presentation (highlighting added). 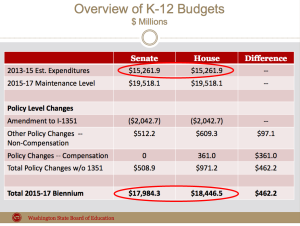 Remember, because the I-1351 class size reduction initiative was adopted by the voters in November, it became part of the “maintenance level” budget. The key numbers to note are the difference between 2013-15 expenditures and the spending level proposed for the 2015-17 biennium. The Senate increases K-12 spending 18 percent; the House, 21 percent. While the two chambers disagree on a number of important issues, both budgets make K-12 spending the top priority.

For more on the education proposals, see this budget comparison by the Washington Research Council.