Yesterday we wrote about the gradual reopening of state economies across the country. Governing magazine provides a nice overview. 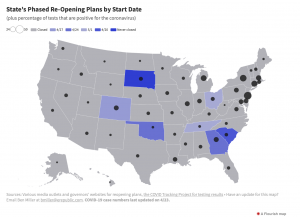 As the report indicates, public confidence will have as much to do with how the economy recovers as does public policy.

A recent survey found that 80 percent of Americans say they will stay at home even if restrictions are lifted, at least until they are convinced that it’s safe to go out. Ninety percent do not support recent protests against stay-at-home guidelines.

Similarly, a number of mayors in states poised to reopen have pushed back against any rapid lifting of restrictions. This mirrors the aversion that governors expressed to the suggestion that they should move at a pace set by the federal government.

The impact of the lockdown is disparate, falling hardest on lower income workers. FiveThirtyEight reports on the effects, informed by an ongoing research study.

But while parents who are still working might be teetering between madness and exhaustion, workers who have suddenly lost jobs and income are facing a different kind of balancing act. That’s particularly the case for low-wage workers. Even when the economy was good, many were already struggling with stress and financial insecurity. Now they’re in an even more precarious position.

A recent survey of low-wage parents gives us an unusually detailed window into the stressful new reality that some of the country’s most vulnerable families are facing. Elizabeth Ananat, an economics professor at Barnard College and Anna Gassman-Pines, a public policy professor at Duke University, started the study last summer. The plan was to periodically survey the same pool of almost 700 parents who work for hourly wages in the service industry in a large U.S. city, recording the everyday pressures and anxieties that shaped low-income families’ lives. Then the COVID-19 pandemic hit, and their project took on new meaning.

It’s a sobering report. A sample.

The first inkling that something profound had changed in the survey participants’ lives came in mid-March. That was right around the time that the city where they lived issued a sweeping lockdown order, closing schools and nonessential businesses. (The researchers are keeping the city anonymous to protect participants’ privacy.) Two things happened almost immediately: According to a series of short daily surveys, respondents’ mental health took a sudden nosedive, and so did the hours they reported having worked that day. “This is a group that’s already experiencing a lot of stress, so any increase is noteworthy,” Gassman-Pines said. “And their stress and anxiety went way, way up after the nonessential businesses closed and their work hours fell.”

It also exposed how quickly their financial situation could turn from precarious to untenable. In addition to their monthlong survey, Ananat and Gassman-Pines sent out a separate, one-time survey in late March to gauge in more detail how respondents were doing. Less than half of the parents surveyed said that they would get any pay for lost work, including sick leave. And more than one-third reported that their income had fallen by more than half since the crisis began. Almost half of the parents in their sample had already lost their jobs.

Another window into the distribution of hardship can be found in the unemployment data. Kriss Sjoblom, Washington Research Council economist, provides this breakdown of the numbers. Click through for his charts. Sjoblom writes,

The five sectors with the greatest number of claims are, in descending order, accommodation and food services; construction; health services and social assistance; retail trade; and manufacturing. Together these five sectors accounted for more than two-thirds of the jobs lost.

He also looks at lost jobs as a share of pre-pandemic employment by sector.

The total number of private sector claims from March 1 to April 18 exceeds 20 percent of February employment. The arts, entertainment and recreation sector has experienced the greatest number of claims relative to February employment (51.4%), followed by the construction (38.8%) and accommodation and food services (36.7%) sectors.

Washington, according to this Tax Foundation post, now ranks 12th in the nation for unemployment claims as a share of the civilian workforce. 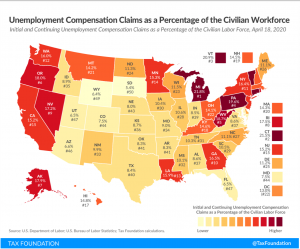 Claims are expected to rise still higher in the next few weeks. Meanwhile, policymaker and public health experts will be watching to see how events unfold in the states that are first to reopen.