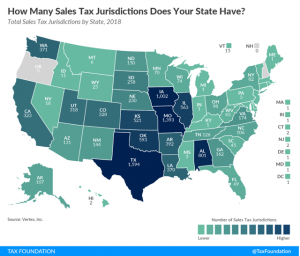 The U.S. Supreme Court is hearing arguments on the taxing of remote sales. Yesterday, we previewed what was at stake.

The Tax Foundation identifies an issue that we hadn’t considered: the growing number of state sales tax jurisdictions. As the map above shows, Washington has 371, exceeding California’s 323 and ranking on the high end of the scale. Tax Foundation analyst Katheryn Loughead writes,

With the Supreme Court expected to act by June, states, retailers, and online shoppers alike are anxious to see just how the tax treatment of online transactions may change this summer. With the state sales tax landscape growing more complicated, the high court’s decision will inevitably be a timely one.

According to October 2017 data from tax software company Vertex, there are now at least 10,814 sales tax jurisdictions in the United States, up more than 800 since we explored this trend in 2014. Each jurisdiction has a distinct aggregate sales tax rate based on a unique combination of factors, including sales taxes levied by taxing authorities at the state, county, city, and district levels.

Loughead points out that the growing number of jurisdictions also means a significant number of annual changes in tax rates. She concludes,

While different parties will certainly continue vying for their preferred outcome from the Supreme Court, when it comes to establishing a consistent baseline standard for how and when sales taxes should be collected, we can only hope Wayfair will bring some level of method to the madness.

Method, maybe. RouteFifty, however, reports analysts expect the short-term revenue effect of the decision to be relatively slight, though the long-term consequences will be significant.

“The incremental revenue that would actually be gained immediately by Wayfair is probably relatively small,” said David Hitchcock, a senior director at S&P Global Ratings. “It’s not significant in the short-run,” he explained. “But it could be significant in the long-run.”

…One reason gains from eliminating the physical presence rule could be limited in the near-term is that e-commerce is only a fraction of the nation’s overall retail sales—about 9 percent last year. Another is that states have found workarounds to the rule and are collecting taxes on many sales made by some of the nation’s largest online vendors, including Amazon.

David Schumacher, director of the Office of Financial Management in Washington state, described the possibility of capturing more taxes from out-of-state, online retailers as “closing a loophole rather than adding a new tax” and said it would “definitely be a good thing.”

“We could always use the extra money,” he said. “But it’s not like a budget buster, or it’s not a solution to all our problems.”

Sales tax collections are especially important in Washington, one of seven states that does not have an individual income tax. But Schumacher said that, with Amazon located there, the state has been collecting sizable online sales tax revenues for some time.

He says the estimated increase in short-term revenues for the state is about $100 million on a $50 billion biennial budget and adds,

“It’s not huge,” Schumacher said of potential new online sales tax revenue. But he added: “I would love to have it for my next budget.”

On one side of the case argued Tuesday are the states, almost all of them with sales taxes. And on the other side are online companies, in this case, retailers Wayfair, Overstock and Newegg. They point out that they, like many other successful online companies, are already paying state sales taxes in an increasing number of states, often because they now have warehouses or stores in many places…

The two sides in Tuesday’s case agree on almost nothing — not the economic facts, not the amount lost in sales taxes, not even on who is hurt by the court’s prior decisions. Each side contends that the other’s solution will annihilate small businesses.

Main Street retailers “are getting crushed because their costs are higher than Internet retailers,” said lawyer Eric Citron, who represents South Dakota.

Small retailers even have a name for what happens. It’s called “show-rooming.” People come into a Main Street store, ask to look at particular products, and then buy the one they like online because the price is 5 to 10 percent cheaper without the sales tax.

Countering that argument is Andrew Pincus, who represents eBay and small business sellers that operate on eBay platforms. He calls the idea of leveling the sales tax playing field a “business killer.”

“The reality is that these [online] small businesses are just going to go out of business, because they can’t absorb the costs,” he maintained.

A decision is expected by the end of June.