Another grim Monday morning survey of the economic costs of the pandemic response.

The National Association of Business Economists reports the stark toll..

The National Association for Business Economics reports in a survey released Monday that economic prospects have nosedived, with 86% of the 107 NABE members who were surveyed expecting a shrinking gross domestic product over the coming year. And for the first time since the Great Recession, which ended in 2009, more business economists reported falling sales than rising sales at their companies over the past three months.

Moody’s Analytics, a financial research firm, projects that the shrinking economy could translate into a revenue drop for states of between $158 billion and $203 billion, or 18 to 23 percent. That’s in fiscal 2021, which begins on July 1 for most states. The variation is based on how soon the economy starts to open up. The longer it takes before people feel safe enough to congregate in offices, factories and shops, the worse the economic pain will be…

Dan White, director of fiscal policy research at Moody’s Analytics, says if the economy remains mostly frozen through the summer, it could take six to seven years for the resulting job losses to be erased, a scenario he calls “unfortunately relatively plausible.” Combine the revenue cuts with the increase in service demand, he says, and “some states are going to see 30 to 40 percent of their budgets that need repairing.”

As Alan Greenblatt reports for Governing, state and local governments are asking for significant federal help and a $500 billion relief package is in the works, but the details won’t be known for a while. Regardless, it won’t fully compensate for the lost revenues.

So we again look to the Washington Research Council’s series examining our state’s responses during the Great Recession. In Part 4, the WRC analyzes budget cuts. Read the post for more details. This struck us. Note first the 15.4 percent higher education decrease.

Although actual NGFO spending increased modestly in 2011–13, the maintenance level for the biennium increased by an exceptionally large 19.3 percent. In addition to caseload increases, this included $861 million for Initiative 728 (class sizes) and $318 million for Initiative 732 (teacher cost-of-living adjustments). Both initiatives had been suspended in 2009–11. The maintenance level also included $566 million for projected increases in pension rates.

As this chart shows, Washington had ramped up spending ahead of the Great Recession and quickly ramped it up again as the state recovered. Note: ARRA refers to the American Recovery and Reinvestment Act, which provided important relief to state budgets. 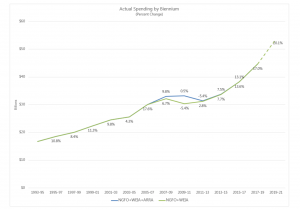 One takeaway from the chart: the state recovered quickly and the pre-pandemic economy was strong. The comeback cannot come to quickly. One positive indicator: The governor is allowing some construction activity to resume.