We posted some early reaction to the governor’s proposed budget earlier today. To that we’d add this press release from the Association of Washington Business. AWB president Kris Johnson says,

Washington’s tax revenues have grown substantially since the end of the recession, going from $31.3 billion in 2011-13 to more than $50 billion today. That’s an incredible growth spurt, and yet we heard today from the governor that it’s not enough. He’s proposing $3.7 billion in new and additional taxes, bringing the two-year state budget to $54.4 billion.

We’re concerned that raising $3.7 billion in new and additional taxes, on top of the growth that’s already occurring, risks derailing Washington’s strong economy. Our focus should be on maintaining Washington’s robust economy, expanding it into the rural parts of the state that have been left out, creating opportunity for all Washingtonians, and making smart choices that prepare us for the next inevitable downturn, not looking for new ways to tax employers that are helping to fuel our growth.

The statement goes into more detail, specifically citing concerns with the proposed capital gains tax, the 67 percent increase in the B&O tax on services, the discussion of removal of dams on the Snake River, and the drawing down of reserves. These will clearly be major topics of  debate in 2019.

Also, on the subject of capital gains, Clay Hill AWB government relations director for tax and fiscal policy, notes the steady increase in proposed tax rate, which he illustrates in the chart below. 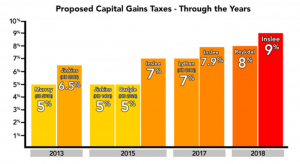 Opponents of the income tax have frequently criticized the capital gains tax proposal for its lack of safeguards. They worry that nothing prevents increases in the rate, expansion of the tax base—including to income that is not from capital gains—elimination of the exemptions, or lowering of the deductions…

Serious proposals for a capital gains income tax should really incorporate calls for a constitutional amendment to authorize the tax, and have a cap on the rate and limits on what can be included in the tax base. But, one would hope we would have an even more serious debate first about why the costs of government are outpacing our impressive economic growth, and what the risks are to our competitiveness and business climate from new taxes at this time.

We suspect that debate will be unavoidable next month.