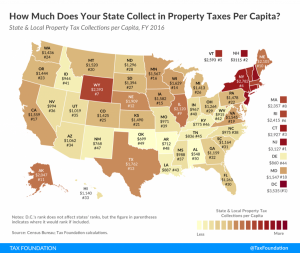 Washington’s state and local property taxes are right about at the national average, as the above Tax Foundation map shows. According to TF, the range is wide.

Property taxes, TF points out, also vary within states, as do property values and government services. And, as we know here, property taxes always attract a lot of taxpayer and political attention.

We mention this, not just because people care about property taxes, but also because it continues an underreported fact. The performance of Washington’s tax structure, idiosyncratic as it is, resembles that of most states, most of the time. As the following chart from a Washington Research Council analysis of the state’s tax system makes clear, per capita tax collections here track well with the US average. 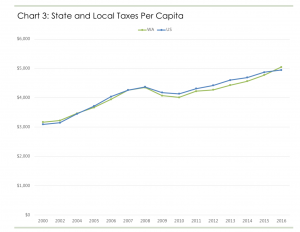 From the WRC summary:

The system is working.