Following up on yesterday’s posts on economic opportunity and on Seattle’s rising business costs, we wanted to run through some other recent labor cost news.

With all the discussion of the $15+ minimum wage debates around the country, we’d nearly forgotten about the City of SeaTac, which now boasts (we think they’d approve the verb) the nation’s highest hourly minimum wage, according to Inc. magazine.

The highest minimum wage in the land will be $16.09 for hospitality and transportation employees in SeaTac, Washington (a city that grew up around the Seattle-Tacoma International Airport). In Seattle, the minimum wage will be $16.

The city announced the increase to $16.09 in a press release last October.

The increase in the living wage rate (2.87%) has been calculated using the consumer price index for urban wage earners and clerical workers, (CPI- W) for the twelve (12) months prior to September 1 as calculated by the United States Department of Labor. Therefore, in accordance with SeaTac Municipal Code (SMC) Section 7.45.050, the living wage rate in effect for hospitality and transportation employees within the City will increase to $16.09, effective January 1, 2019.

The wage was established by a voter-approved ballot measure in 2013.

The Associated Press reports 29 states now have established a minimum wage higher than the federal rate. NPR lists the changes in statewide minimum wage. Washington’s $12 rate ties with Massachusetts and the California large-employer (25+ may be pushing it for “large”) rate for top in the nation, as PBS chart below shows. 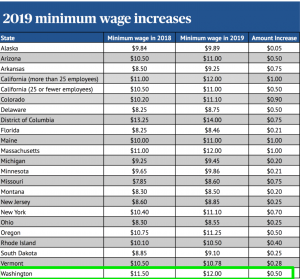 The Association of Washington Business writes,

Initiative 1433, passed by voters in 2016, required the state’s minimum wage be increased to $12 per hour for workers age 16 or older on Jan. 1, the state Department of Labor and Industries (L&I) announced last week. The agency pointed out that the cities of SeaTac, Seattle and Tacoma have their own minimum wage rates and encouraged employers in those cities to contact city officials for more information.

L&I enforces the state’s wage-and-hour laws, which includes the minimum wage. The state minimum wage applies to most jobs, including those in agriculture, and does not calculate tips as part of employee wages.

Minimum wage in Seattle is soaring to $16 per hour in 2019 for the city’s largest employers. The wage increase affects companies with more than 500 workers worldwide.

Companies with less than 500 employees will pay at least $15 per hour as of January 1. According to Seattle’s Office of Labor Standards, “Small employers can meet this requirement by paying no less than $12.00 per hour in wages and contributing at least $3.00 per hour toward an employee’s medical benefits and/or reported tips.”

In its report on Seattle’s rising business costs, the Seattle Time notes the results have been mixed for employees.

“If you want to hire somebody in Seattle today, you’ve got to pay a premium wage,” said Jacob Vigdor, a UW public-policy professor who is leading a team studying Seattle’s minimum-wage increases.

His team’s latest research suggests that the minimum-wage increase has led to rising wages for people who worked more hours, but little to no benefit for workers with lighter work schedules.

Trade-offs, certainly. With heightened business costs, including the new paid family and medical leave law, the coming year will be instructive.