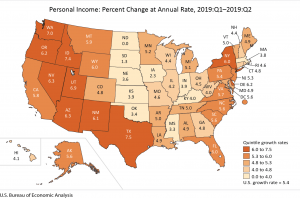 Washington annualized personal income growth in the second quarter of 2019 was among the highest in the nation, according to the U.S. Bureau of Economic Analysis. As the map above shows, Washington’s 7.0 percent growth rate topped Oregon’s 6.2 percent and California’s 5.8 percent, making it the West Coast winner. Idaho, though,  posted a strong 7.4 percent, just behind Texas, which boasted the nation-leading 7.5 percent.

State personal income increased 5.4 percent at an annual rate in the second quarter of 2019, a deceleration from the 6.2 percent increase in the first quarter, according to estimates released today by the Bureau of Economic Analysis (table 1). The percent change in personal income across all states ranged from 7.5 percent in Texas to unchanged in North Dakota.

The report was released September 24 (got lost in our mail).

The Wall Street Journal editorial board dug a little more deeply into the data. Observations related to our state include:

The BEA revised personal income growth upward in most states, especially in the West and Midwest. Incomes were revised up 4.2% in Colorado and Washington, 3.9% in Utah and 3.1% in Idaho…

During the early Obama years California ranked among the fastest growing states as its housing market recovered and tech startups expanded in the Bay Area. But entrepreneurs are increasingly choosing low-tax climes with less expensive housing. Over the last year, information industry earnings rose a mere 2% in California compared to 19% in Washington, 12% in Oregon and 10% in Arizona…

The Bureau of Labor Statistics reported this week that employment over the last 12 months increased 1.8% in California, 2.4% in Texas, 2.5% in Arizona, 2.6% in Washington, 2.8% in Utah, and 3% in Nevada. The trend bears watching to see if California pays a price for its binge of new labor and environmental regulation.