The recently completed legislative session ended on time April 28, with passage of a $52.8 billion state budget. To support an 18.3 percent increase in biennial spending, lawmakers adopted approximately $1 billion in new and increased taxes.

We’re interested in your thoughts on the state budget and legislative session. Thank you for taking a few minutes to complete our brief survey.

Economic uncertainty – across the globe and in our neighborhoods – has become commonplace early in 2019. Although our state has enjoyed nation-leading job and income growth, the murmurs of concern have mounted in many corners. As often as we hear announcements of new jobs, new stores, manufacturing plants, and restaurants, we hear that consumers and employers are losing confidence. Retail sales were down last December.

Economists are revising their 2019 forecasts, saying growth is slowing. Nearly half of the nation’s  business economists anticipate a recession by the end of next year.

Expectations drive budgets, for families, businesses, and governments. The mechanics are simple. How much money do we think we’ll have? What are our spending commitments? Our priorities? What can we do without? How much should we hold back for emergencies?

Over the last ten years, state spending has grown 44 percent. And revenue growth in our state has been among the strongest in the nation. Yet, many lawmakers are now calling for new taxes and higher spending.

Against this backdrop, we want to know your thoughts on the state economy. Do you expect continued growth? Are we headed for a slowdown?

Lawmakers return to Olympia on Monday, January 14, for the 105-day 2019 legislative session. We’re interested in your priorities for the session. Please let us know by responding to this brief survey.

Last week, Gov. Jay Inslee presented his biennial budget proposal for 2019-2021. The $54.6 billion budget represents a 22.3 percent increase in spending from current levels. To fund the increased spending, the governor proposes several tax increases, including a 9 percent capital gains tax and a 67 percent increase in the B&O tax rate on service businesses (from 1.5 percent to 2.5 percent).

The governor’s proposed budget begins the legislative and public discussion. Next year, the House and Senate will present their plans, eventually negotiating a final budget. The proposal introduced last week will surely shape the debate. We’re interested in your views on some of its key provisions.

Please take a few minutes and share your thoughts with us by taking this brief survey.

In the recent midterm election, Washington voters rejected carbon-fee Initiative 1631 (44-56) and rejected local food and beverage taxes by endorsing Initiative 1634 (56-44). The results echo the 2016 election, when voters rejected the I-732 carbon tax and voter support in 2010 of I-1107, which repealed food and beverage taxes imposed by the Legislature that year.

After an election, pundits and policymakers often try to figure out why voters acted as they did. Sometimes it’s easy. Often, it’s more challenging. And, as we’ve seen with these two tax and fee measures, their advocates try to draw a lesson what will allow them to try again with more success. Putting a price on carbon or taxing “unhealthy” food and beverages are ideas that persist across the country, as well as here in Washington.

We’re interested in your thoughts on the recent election and next steps. Please take a minute to take our brief survey.

The ballots have been mailed. The decisions are in your hands.

Next Tuesday, the votes will be counted. (OK, this is Washington, they may be counting them for a while.) This year, we’re particularly interested in two statewide initiatives with fiscal consequences.

Here’s how they appear on your ballot:

Initiative Measure No. 1631 concerns pollution.
This measure would charge pollution fees on sources of greenhouse gas pollutants and use the revenue to reduce pollution, promote clean energy, and address climate impacts, under oversight of a public board.
Initiative Measure No. 1634 concerns taxation of certain items intended for human consumption.
This measure would prohibit new or increased local taxes, fees, or assessments on raw or processed foods or beverages (with exceptions), or ingredients thereof, unless effective by January 15, 2018, or generally applicable.
Here’s a link to the Secretary of State’s voters guide with more information on these measures (and a lot more).

What do you think? Are these measures right for Washington today? Let us know

U.S. job openings reached a record high nationwide in August, suggesting that employers are having a difficult time finding qualified workers. In its monthly report, the U.S. Labor Department said there were 7.14 million unfilled positions in the economy in August, outpacing the number of Americans actively searching for work by 902,000.

Nearly 500,000 of those job openings were in manufacturing, a sector the Association of Washington Business highlighted this month with a bus tour of several dozen Washington manufacturers.

During its second-annual tour, AWB emphasized the quality career paths that manufacturing offers and encouraged policymakers and others to support Washington manufacturers.

“Manufacturing is vital to Washington’s economy and provides a proven pathway to the middle class,” said AWB President Kris Johnson.

Manufacturing supports more than 282,000 jobs in Washington with an average annual wage of more than $72,000 compared to the overall average of just under $55,000. 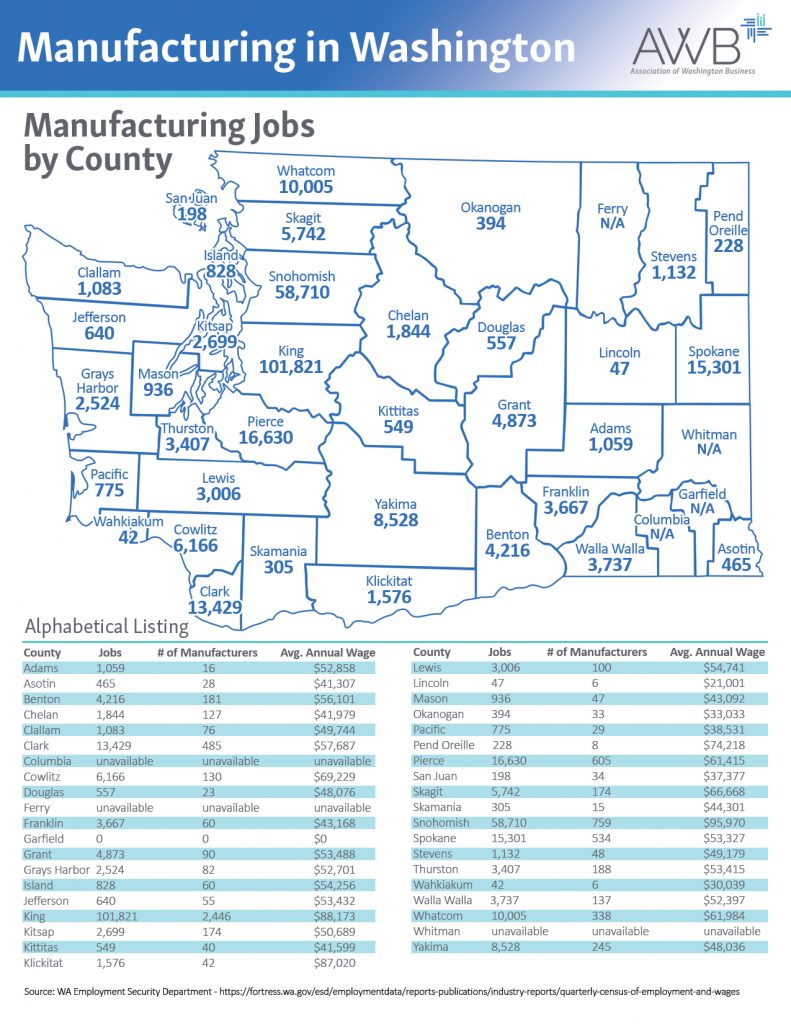 “A lot of manufacturing still takes place here in the U.S. — and Spokane — despite stories to the contrary,” Michael Senske, CEO of Pearson Packaging Systems, said during AWB’s visit.

Many of the manufacturers AWB saw during the tour said that finding qualified workers is difficult, confirming the national data.

“We have had good success in getting general labor. It’s finding high-skilled labor that’s more of a problem,” Bruce Babcock of FarWest Fabricators told the Yakima Herald-Republic.

Hostart, a Spokane Valley manufacturer of equipment that warms engines for trucks and other heavy equipment, reports challenges as well. The Spokesman-Review reported:

Hotstart’s employee count has grown by about 50 over the past two years. The company likes to grow its own talent, encouraging employees to work their way up the ranks, (CEO Terry) Judge said. Hotstart offers in-house training and tuition reimbursement.

“We love to have people start with us and grow their careers with us,” he said.

With fewer people exposed to making or fixing things, the pool of prospective workers interested in a manufacturing career is shrinking, Judge said.

“We don’t have to have people who are highly skilled. We’ll train them,” he said. “But we want people who are motivated and excited to learn. They need to have an affinity for the work.”

In a blog post this past Friday, the Washington Research Council cited a Brookings Institution report that outlines the impact of retaliatory tariffs from the United States’ largest trading partners on many parts of the country.

According to the Brookings report, 6.1 percent of Washington exports are affected by the tariffs. The impact is greater in rural parts of our state, where 17.4 percent of exports are affected. Of 281 smaller metro areas nationally, Wenatchee has the highest share of exports (19 percent) affected by retaliatory tariffs, and Yakima has the fourth highest (17.6 percent).

Are you concerned about U.S. trade policy? Please share your thoughts with us by filling out this short survey: