Yesterday we acknowledged Washington’s “best state” in America ranking from U.S. News & World Report, noting that such a ranking is validation of many things our state is doing right. These things are subjective, of course, but U.S. News does a great job.

We encourage you to read the methodology. Few would quibble with the areas they consider; 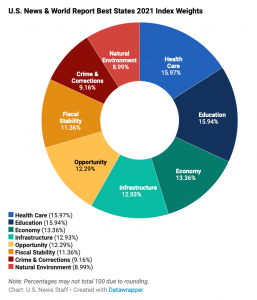 One thing to consider: All of the factors used in these kinds of rankings are backward looking. Inevitably. There are also always data lags. The winner of the race is the one that breaks the tape; it’s only determined after the race is won. And then you’re on to the next meet. Past performance is an important indicator of who’s likely to win, but – as they say – it’s really no guarantee of future results.

The Association of Washington Business makes that point well. AWB notes the appropriately celebratory comments from public officials and the media, and comments.

The news was greeted with congratulatory headlines from The Seattle Times and Gov. Jay Inslee, and indeed, there is much to celebrate.

However, digging deeper into the rankings shows some reasons for self-reflection and even caution, especially as proposals now moving through the Legislature would erode some of the foundational pillars — like low-cost green energy and no income tax — upon which this high ranking sits.

Washington ranks well in the survey in part because of our state’s lack of an income tax and our affordable energy. But how much longer will be able to maintain those competitive advantages with moves underway to enact a capital gains tax — the first step toward an income tax — and threats to remove the lower Snake River dams?

It’s also worth noting that Idaho took the number five slot in the list (jumping up in the rankings from No. 16 last time). Our next-door neighbor presents an attractive option for Washington employers to potentially relocate if taxes and impediments to business increase in Washington.

Right. Employers have choices. If anything, the experience of remote work during the pandemic has expanded their options.

The U.S. News report on Washington included these observations from a leading investor.

“In the almost 15 years I’ve been in venture now, it just keeps growing. There are more opportunities, more founders,” says Tim Porter, a managing director at Madrona Venture Group, one of Washington’s oldest venture capital firms. “Even through this super challenging year, Seattle and Washington are going to come out on the other side stronger.”

Like Porter, we hope that continues. But we’re also struck by risks, as indicated by another member of the Madrona Venture Group, as set out in a Seattle Times opinion piece. We cited it here.

The ST also carried an op-ed by Matt McIlwain, managing director, Madrona Venture Group, citing the damage a capital gains tax would do to the state economy.

He begins by identifying three “myths” used to support the tax: the state needs new taxes, the capital gains tax is not an income tax, and that Washington voters support a capital gains tax.

He effectively debunks the myths: there’s no budget shortfall; the federal government and every state with a capital gains tax recognizes that it is an income tax; and, Washington voters have consistently rejected income taxes.

There are other important reasons why this nonuniform, capital gains income tax is a bad idea.First, it is unconstitutional. That fact was reinforced as recently as two years ago when the city of Seattle income tax was defeated in the state courts…

Second, the income tax is proposed during one of the great migrations of people from high income tax states like California, Illinois and Connecticut to no income tax states like Texas, Florida and Washington. Many people can work from anywhere in a “digital first” world, and they are choosing to do so. Our governor and Legislature are trying to eliminate a critical state competitive advantage for attracting and retaining people, companies and the jobs they create. As was proved after the defeat of I-1098 in 2010 (just after the last economic downturn), the best strategy to ensure long-term, economic growth is pro job creation, pro investment and a pro-opportunity approach that attracts and inspires people to live and work in Washington state.

Finally, we all understand that a “high earners” income tax is a foot in the door for taxing every Washingtonian.

Signs that things may be changing include data noted by ST columnist Danny Westneat.

Seattle may not be dying, as the saying goes. But it could be doing something we haven’t seen in decades around here: shrinking.

Whether it was the pandemic, the protests and riots, the urban decay, the high costs, the work-from-home trend or pick your reason, people appear to have ditched the Emerald City last year in unusually large numbers, new data shows.

So far, he reports, they’re not moving far.

The data is more solid on showing where the people went. For the most part it wasn’t to Austin or Charlotte or any of the other supposed “Zoom cities.” It was to Bellevue and Shoreline and Kirkland.

The top 10 destinations for Seattle leavers, measured by “net migration,” were all within 35 miles. No. 1 was Bellevue. According to the USPS, 3,521 Seattle households decamped to Bellevue in 2020, while 1,941 Bellevue households moved into Seattle. The difference, or net migration, is a 1,580-household shift from Seattle to Bellevue.

Read the whole column; we don’t want to overstate the problem. His conclusion, though, may have implications beyond the state’s largest city.

Whether Seattle turns out to be on a shrinking trend, or just a pandemic pause, the city’s fall from its lofty perch ought to be the top issue. If the candidates are not talking about revitalization — of businesses, of downtown, of the parks, the schools, the crime rate, the whole Seattle story arc that has been faltering of late — then they’re not doing it right for 2021.

“Why are people leaving?” is quite a different question than the growth-fueled ones that dominated local politics for the past decade. Better adapt and start answering it.

AWB closed its post on the rankings this way.

It’s gratifying to see Washington recognized as a great place to live and do business. The next step is keeping us there and making our great state even better.

“Why are they leaving?” is a good question for Seattleites… and perhaps a foreshadowing of questions state political leaders may soon be asking.
A related question: Why are lawmakers raising taxes that jeopardize future business investment and job creation here when there’s no budget shortfall and a great deal of business hardship after a year of pandemic?