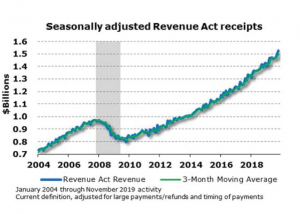 Another positive update from the Economic and Revenue Forecast Council. As the chart shows, the state has been on a steady upward trend. This month comes with a REET twist.

ajor General Fund-State (GF-S) revenue collections for the December 10, 2019 – January 10, 2020 collection period came in $85.0 million(4.8%) above the November forecast. Most of the surplus came from December real estate excise tax (REET) collections, which were $74.4 million higher than forecasted due to a rush of sales ahead of a January 1 increase in tax rates on properties worth more than $1.56 million. The rush in sales will likely decrease future REET collections by an amount greater than the December surplus. Cumulatively, collections are now $168.7 million (3.7%) higher than forecasted.

Under the new law, the 1.28 percent flat rate was replaced with a graduated rate determined by property sales prices ranging from 1 percent for properties under $500,000 to 3 percent on properties worth more than $3 million. Developers have warned that the restructured tax will affect commercial real estate the most and could shift investments away from Washington and to other states with lower REET rates. Developers also anticipated strong commercial sales in December to avoid the new tax rate.

Total nonfarm payroll employment rose 13,700 (seasonally adjusted) in November and December, which was 500 more than expected in the November forecast. Private services-providing sectors added 7,700 jobs in the two-month period. The manufacturing sector added 1,700 jobs of which 900 were aerospace jobs. Construction employment increased by 800 jobs and government employment rose by 3,600 jobs…

So far, so good. And a reminder that tax policy influences behavior.