Metro Seattle has long been a widely acknowledged winner in the innovation economy. A new report from The Brookings Institution confirms the perceived trend, finding that Seattle is one of just five tech hubs accounting for 90 percent of tech job growth from 2005 through 2017. (Press release, executive summary.) The region’s good fortune, the report says, comes at the expense of other parts of the country to such an extent that it constitutes a “grave national problem” requiring a major Congressional intervention.

Based on “winner-take-most” network economies, the innovation sector has generated significant technology gains and wealth but has also helped spawn a growing gap between the nation’s dynamic “superstar” metropolitan areas and most everywhere else.

Neither market forces nor bottom-up economic development efforts have closed this gap, nor are they likely to. Instead, these deeply seated dynamics appear ready to exacerbate the current divides.

Which is why the nation requires a major push to counter these dynamics. Specifically, the nation needs—as one initiative among others—a massive federal effort to transform a short list of “heartland” metro areas into self-sustaining “growth centers” that will benefit entire regions.

The recommendations are clearly arguable: the record of Congressional action to spur economic vitality is, at best, spotty and there’s evidence that the desired dispersal in already taking place, albeit slowly. And heartland communities are working hard to provide incentives, improve their talent pools, and upgrade infrastructure required by tech employers.  But there’s no question that the authors’ concern with concentration is backed up by some key numbers. The chart below shows the top five.

The map below shows the employment trends in the innovation sector. 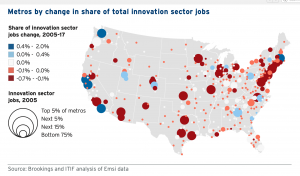 proposes that Congress establish a major new initiative to select a set of promising metro areas to receive a major package of federal innovation inputs and supports that would help these areas accelerate, transform, and scale up their innovation sectors. The report envisions the designation of eight to 10 potential growth centers (all at a location removed from existing successful tech hubs) that would receive substantial financial and regulatory support for 10 years to get “over the hump” and become new, self-sustaining innovation centers.

Among the “takeaways” identified:

1. Regional divergence has reached extreme levels in the U.S. innovation sector. The innovation sector— comprised of 13 of the nation’s highest-tech, highest-R&D “advanced” industries—contributes inordinately to regional and U.S. prosperity. Just five top innovation metro areas—Boston, San Francisco, San Jose, Seattle, and San Diego—accounted for more than 90% of the nation’s innovation-sector growth during the years 2005 to 2017.

Just five metro areas – Boston, San Diego, San Francisco, San Jose and Seattle – snapped up 90% of the 256,063 tech jobs created from 2005 to 2017, according to a study released Monday from The Brookings Institution. The remaining 10% was divvied up among 377 urban areas.

The share of those jobs shrank dramatically in would-be hubs like Chicago, Durham, North Carolin; Philadelphia, Dallas and Wichita, Kansas, researchers found, with the bottom 90% of U.S. metro areas collectively losing one-third of these positions in the same period…

The trend creates its own set of problems for the tech hubs, the authors note, including skyrocketing housing costs, worsening traffic, and wage expectations that can freeze out smaller companies.

But the economic prosperity is significant: in the 20 cities with the most employment in innovation industries, the average output per worker is $109,443, according to the report. That’s one-third more than the other 363 metropolitan areas nationwide.

The consequences of this stratification are being felt in Seattle and other top cities for tech jobs.

“These range from spiraling home prices and traffic gridlock in the superstar hubs to a problematic ‘sorting’ of workers, with college-educated workers clustering in the star cities, leaving other metro areas to make do with thinner talent reservoirs,” the report says.

Tech concentration is driven by handful of factors, and tends to be self-reinforcing, according to the report. Cities like Seattle, for example, have major job creators like Amazon and Microsoft which spawn startup ecosystems of smaller tech companies. The city also has a major research institution in the University of Washington, which continues to feed the talent pipeline. In other cities with major universities but fewer tech employers, talent is often exported.

There’s a lot to absorb in the report, which is likely to receive significant attention during an election year that has already seen discussion of the effects of tech concentration. Something to watch.