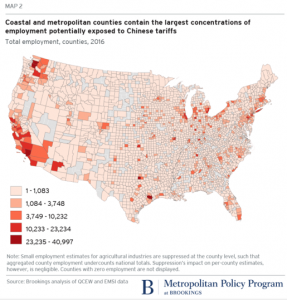 Washington and other Pacific Coast states are most at risk in a trade war with China, according to a new study from the Brookings Institution. The map above shows the counties with employment concentrations most likely to be affected by Chinese tariffs. The darker the red, the more the exposure. Washington’s Puget Sound region, along with Southern California, are clearly identifiable as risk centers.

The News Tribune carries a Sacramento Bee story that points out,

Most of the concern over the president’s escalating trade conflict with China has centered on the fallout for farmers, particularly in the Midwest, a part of the country that disproportionately voted for Trump in 2016.

But an analysis by experts at the Brookings Institution, a non-partisan District of Columbia think tank, finds that the West Coast has far and away the most jobs on the line in the tariff tit-for-tat between the Trump administration and Beijing.

Agriculture here, too, is at risk, as the Yakima Herald-Republic reported last month.

About 13 percent of the state’s cherry crop went to China last year, while Hong Kong and China represent the state’s fifth largest export market for apples…

Washington growers sent 3 million boxes of cherries to China in 2017, and 5.7 million apple boxes to markets in mainland China and Hong Kong in 2016, the most recent year of complete data available from the Washington State Tree Fruit Association.

Citing the Brookings study, the Seattle Times editorial board says Washington has much to lose should a trade war become heated.

Nearly 154,000 of Washington’s employees work in industries that would be affected by China’s countermeasures, a higher number of workers than in any other state besides California or Texas, according to the Brookings study…

By one measure, Washington would be the worst off of any state in the nation. Jobs in directly affected industries here make up 4.8 percent of the total workforce, a larger share than in any other state, according to the Brookings study. Kansas has the second-largest percentage of potentially affected jobs, at 3.5 percent of its total employment.

Among all U.S. counties, King and Snohomish counties trail only California’s Los Angeles County as having the highest number of jobs that could be at risk.

The Brookings analysts write of the broader implications:

For one thing, as several of us have said before about trade reliance more generally, the map of U.S. tariff exposure makes clear that while any “trade war” may be entered as a matter of abstract geopolitics, its particular battles will ultimately involve local and regional economies and jobs—with potentially unexpected ramifications. As we wrote before, “trade involves millions of workers in hundreds of real and varied places, and often drives crucial local commerce.” The implication: any coming trade wars will not be remote from America’s local communities, which will likely not remain silent about their views of any potential dislocation.

In our 2015 foundation report, we wrote of the importance of trade to our state.

Washington’s economy is highly dependent on global trade. The state ranks second in the nation in exports per capita. According to the Washington Council on International Trade, 40 percent of the jobs in the state are related to trade in some way. Given its many trade advantages, the state is well-positioned to continue to be a leader in international trade for years to come.

That is, provided we maintain trade-friendly public policies.