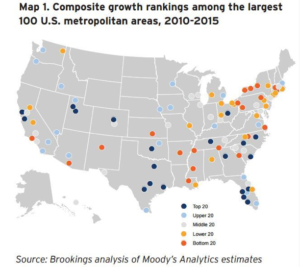 A new report from the Brookings Institution examines the economic performance of the nation’s top 100 metro areas. The numbers, presented in three maps, show an uneven recovery.

Three maps from the Metro Monitor—illustrating changes from 2010 to 2015—help tell the story of an accelerating, but as-of-yet incomplete, economic recovery.

The second map focuses not on which economies are growing bigger and more dynamic, but instead on the quality of their growth, which is measured by indicators like productivity and average incomes…

That leads to the third map, which arguably speaks most directly to the current economic debate—are people feeling the economic momentum in terms of employment and pay?

Seattle is among the very fortunate few:

Just 14 of the 100 largest metro areas managed above-average performance in all three areas. They included some of the highly-educated tech centers—Austin, Denver, Raleigh, San Jose, and Seattle—that shone blue across the maps, but also growing and diversified mid-sized markets like Charleston, Columbus, Nashville, and Omaha. Many more metro areas—23 in all, in nearly every corner of the country—failed to beat the average in any of the three categories. Residents of these lagging metro areas may indeed feel like the recovery has yet to hit home for them.

We encourage you to read the short report and consider the maps. They go a long way toward explaining why this recovery has felt so tentative and uneven.