Seattle is one of 19 “knowledge capitals” in the United States and Europe, according to a wide-ranging study released today by the Brookings Institution. Authored by Jesus Leal Trujillo and Joseph Parilla, the report examines the 123 largest metro economies on the planet. Together, they produce one-third of global gross domestic product despite having only 13 percent of the world’s population.

They describe knowledge capitals as “highly productive innovation centers…with talented workforces and elite research universities. These regions are at the world’s innovation frontier, and thus constantly challenged to generate new knowledge and ideas to sustain growth.”

The 19 cities identified as knowledge capitals by the study are:

Seattle, then, is in both elite and generally familiar company.

The report has some fascinating interactive graphics. The screenshot below shows Seattle ranking 5th among the 19 in share of residents with a tertiary (postsecondary) education.  We encourage you to explore the tables and the report. It’s an important contribution to our understanding of changing global dynamics. 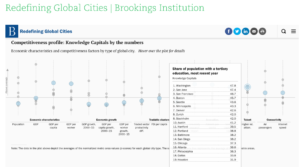 As we’ve written previously (and often), Washington has been an importer of educated talent. In our foundation report we discuss our Achieve priority at length, making the point that

Education expands opportunity. By 2020, 70 percent of Washington jobs will require postsecondary education or training. Preparing our students for these opportunities requires high-quality education at every level.

It’s great for the state to be home to a knowledge capital, one of the innovative cities creating world class opportunities. We need to be certain that we are preparing our students for the careers being created here.