…provides an update on the changing momentum and geography of America’s advanced industries sector—a group of 50 R&D- and STEM (science-technology-engineering-mathematics)-worker intensive industries the vitality of which will be essential for supporting any broadly shared prosperity in U.S. regions.

Here in three quick snapshots is how Washington and its two major metros fare in the examination. 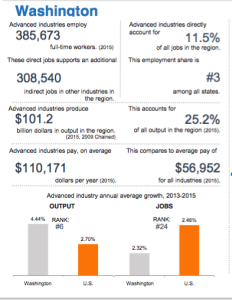 The Seattle-Tacoma-Bellevue metro area again shows up well: 10th in AI jobs, 2nd in AI jobs as a share of all jobs, but falling a bit in the growth rankings. That’s possibly because growth in the metro area is measured against an already-high base level of AI employment. And, as Emily Parkhurst writes in the Puget Sound Business Journal, the growth rate has been affected by trends in aerospace employment.

Spokane finishes in the top 100, and shows significant room for growth.

The Brookings researchers note the nation’s economy is “performing only modestly well” and that half the hiring since 2010 has been in low-wage jobs. They add,

Which is why the Metropolitan Policy Program at Brookings has for the last several years been arguing that to truly rebuild America’s drifting economy, city and metropolitan area leaders—supported by their states and Washington—must work to build an “advanced economy that works for all.”

That vision is reflected in our Priorities for Shared Prosperity. The Brooking report released today expands on the ideal:

An advanced economy that works for all would achieve a higher trajectory of long-run growth by improving the productivity of individuals and firms in ways that raise the standards of living for all people while reducing racial, spatial, and income disparities.

How might cities, metro areas, and the nation build such an economy? One step is certain: Along with improved innovation and training initiatives, stronger labor standards, and a rewoven social safety net, a key element of the needed reconstruction is a metro-by-metro rejuvenation of the nation’s high-tech “advanced industries” sector.

The importance of these high-value innovation and technology industries to any future shared prosperity is why the Metro Program began to focus on the sector in the wake of the 2008 economic crisis.

We continue to see progress in Washington. As we wrote yesterday, the urban-rural economic divide challenges policymakers. In Crosscut, Jaclyn Zubrzycki reports on efforts to improve STEM education in rural schools. The story suggests ways in which educating for “innovation and technology industries” can increase career opportunity in rural communities, contribute to the local economy and bridge the urban-rural divide.