Washington businesses are taxed more heavily than businesses in most other states, according to a Washington Research Council analysis of data prepared for the Council on State Taxation by Ernst and Young.

The upcoming legislative session will feature discussions about whether new revenues are necessary; inevitably there will be legislative proposals to increase business taxes. According to a report from the Council on State Taxation, businesses in Washington paid 50.1 percent of state and local taxes in 2017, well above the U.S. average of 43.7 percent. Additionally, Washington businesses paid $5,700 in state and local taxes per employee, the seventh highest amount in the country and 16.3 percent more than the national average.

The following WRC chart shows that B&O revenues have grown at the fastest rate of all major taxes since 2000. 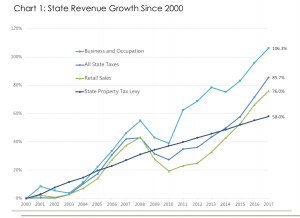 The Research Council points out,

Washington raises more money from the B&O tax than other states do from their corporate income taxes (WRC 2018). Further, of the three top state tax sources in Washington (sales, property, and B&O), B&O tax revenue has increased the most on a percentage basis since 2000. B&O revenue has grown 106.3 percent, compared to 85.7 percent for all state taxes (DOR 2018).

Businesses do not only pay the B&O tax, however. They also pay sales and property taxes, as well as a host of other taxes at the state and local levels.

A useful measure of the business tax burden, one not often referenced, is taxes per employee. This WRC chart breaks out that dimension. 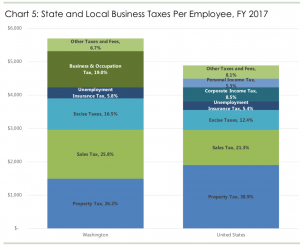 …Washington ranked seventh highest nationally in state and local business taxes per employee in 2017. They were $5,700 in Washington, 16.3 percent above the U.S. average of $4,900.

Again, as the Research Council writes, business taxes are likely to feature heavily in the 2019 session, with the governor already proposing hefty increases. This valuable report should inform and temper the coming debate.