Housing affordability poses a major policy problem in our state, particularly in the fast-growing metro areas. We’ve written about it here and here. Now comes a new report, The Cost of Not Housing, by Joel Kotkin, whose work we often cite here.

The report considers the consequences of failing to assure the market provides an adequate supply of affordable housing.

It is a commonplace view that housing does not contribute to the overall fiscal and economic condition of cities. Recent trends—both nationally and here in California—suggest that this is not the case. New housing, including affordable units, provide some direct stimulation through construction jobs, but also allow people, particularly young families, to stay, work and shop locally. Lack of affordable housing ultimately drives people, particularly the entry level and young educated, out of regions where their labor would be coveted by local companies.

At just 24 pages, the report is an accessible and cautionary diagnosis of a problem that extends far beyond the California state line. Tech industry leaders will recognize this issue:

In a 2014 survey of more than 200 business executives conducted by the Silicon Valley Leadership Group, 72 percent cited “housing costs for employees” as the most important challenge facing Silicon Valley businesses.

And the data show that young workers with degrees are gravitating to where housing is more accessible, as shown in this chart. 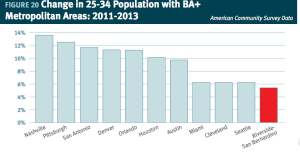 These realities may explain why there has been a shift of younger workers (those most affected by these high prices), even among educated millennials, to more affordable regions such as Nashville, Orlando, New Orleans, Houston, Dallas-Fort Worth, Pittsburgh, Columbus, and even Cleveland. The one area that still is attracting more of these workers is the Inland Empire, which still has relatively reasonable housing prices, at least by California standards.

Virtually all of California’s closest competitors—Seattle, Salt Lake City, Denver and, even after the crash, Las Vegas—also are building more housing for their residents.

Though not necessarily at a pace that mitigates the affordability problem here.

Kotkin suggests that regulatory policies play a role in limiting supply, which contributes to higher prices.

Ultimately, urban policy should be about choices driven by consumer preferences and human needs. People should be allowed, as much as is feasible and economically sustainable, to live where they please, whether in core cities, suburbs or elsewhere. Simply put, the notion that development must be “steered” into ever denser pockets runs counter to the wishes of the vast majority, and, as we have demonstrated, has severe impact on housing production and affordability.

Some claim that the state’s “pack and stack” approach can solve the housing affordability crisis by increasing densities. Yet by most measurements, higher density housing is far more expensive to build…

Ultimately, the road back to housing sanity—and a brighter future for California’s middle and working classes—involves shifting planning priorities away from ideology and toward something more responsive to human needs. California’s housing policy should be open to all the various forms of housing—from high and mid-density to single family—and also not seek to eliminate the more affordable option of peripheral development. Rather than insist on one form of urbanism, we need to support the idea that a metropolis’ heart exists where its people choose to settle.

For those interested in understanding how regulatory policy and housing affordability affect the economy and, in particular, young and low- and middle-income families, the Kotkin report can provide helpful guidance.