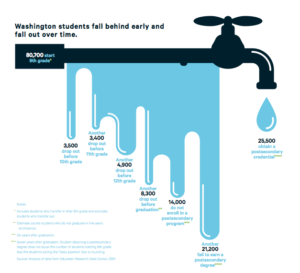 The Seattle Times recently reported on a disturbing trend in public education in our state: High chronic absenteeism rates.

Nearly 17 percent of students in Washington are chronically absent from school, meaning that each misses at least 18 days of instruction. It doesn’t take much imagination to see how seriously that could hinder learning.

A new national report analyzing attendance rates across the country goes even further, noting that in 28 percent of Washington schools almost a third of all students are missing weeks of classwork, a rate that ranks as second-worst in the nation, after Alaska.

As we wrote in April, this is a known problem. The data cited in the report are not new, as the Times reports.

The numbers come from a national report, “Portraits of Change.” Attendance Works released the findings last week after analyzing federal data from the 2013-14 school year, the most recent full set available.

Though the numbers are 4 years old, education officials in Olympia do not dispute the gist: chronic absenteeism is a major problem in Washington, they said, and only recently has this come to light.

In April, we were writing about a new release from the Office of the Superintendent of Public Instruction.

Our April post commended state education leaders for their efforts to improve attendance. And, we wrote,

As OSPI points out, there is a strong correlation between absenteeism and failure to graduate from high school. Our new Opportunity Scorecard confirms Washington’s low graduation rate.

Our state drops one spot to 22 in the ACHIEVE rankings after accounting for updated high school graduation rate data. Washington’s graduation rate has increased consistently in recent years, rising to 78.2 percent in 2015, however, it still ranked among the 10 worst states in that category. To crack the top 10, Washington would have needed a graduation rate of 87.8 percent or higher.

Failing to graduate from high school has lifelong consequences for individuals, limiting their opportunity to participate in our state’s thriving economy. It also affects economic growth here.

Improving the graduation rate is a priority, and an essential step toward increasing postsecondary attainment. An important report by the Washington Roundtable and Boston Consulting Group emphasizes that most of the jobs opening up here in the next five years will require a postsecondary credential or some college. The infographic at the top of this post comes from that report. We cited a grim finding in the report:

Of 80,700 students entering 9th grade, about one-quarter of them, 20,100 will drop out before graduation. Those students have a mountain to climb to reach a career job.

We can, and must, do better.