Even when it’s expected, the jump in  unemployment startles. Today’s report from the Bureau of Labor Statistics tells the story of the pandemic’s toll on the economy.

Bill McBride published a chart in Calculated Risk that shows how the spike in initial claims compares with previous recessions. There’s really nothing comparable. 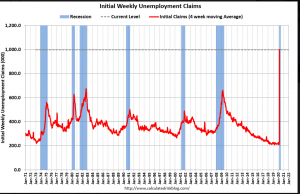 At the worst of the Great Recession, continued claims peaked at 6.635 million, but then steadily declined.

Over the next few weeks, continued claims will increase rapidly to a new record high, and then will likely stay at that high level until the crisis abates.

When that is, who knows? Please. Soon.

As job losses mount, some economists say the nation’s unemployment rate could approach 13% by May. By comparison, the highest jobless rate during the Great Recession, which ended in 2009, was 10%…

Ellen Zentner, an economist at Morgan Stanley, said in a note to clients that 17 million jobs could be lost through May — twice the entire 8.7 million jobs that were lost in the Great Recession. She expects the unemployment rate to average 12.8% in the April-June quarter, which would be the highest level since the 1930s.

Still, Zentner also expects the economy to start recovering by the second half of the year. It will take time for things to return to something close to normal, she projects: The unemployment rate could still top 5% at the end of next year.

Last week we noted skyrocketing claims in our state.