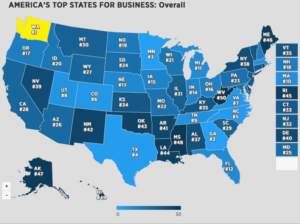 Washington is America’s “top state for business” according to CNBC. The report offers glowing commentary on the state’s assets:

With the nation’s fastest-growing economy and an all-star business roster of household names and up-and-comers, Washington — the Evergreen State — soars above the competition as America’s Top State for Business in 2017.

The home of Amazon and Costco, Boeing and Expedia, as well as rising stars like Adaptive Biotechnologies, online marketplace OfferUp and space company Blue Origin, Washington has the old and new economies covered — as well as pretty much everything in between.

But the success story does not end there. At a time when the best workforce rules, Washington boasts the nation’s largest concentration of STEM (science, technology, education and math) workers. Nearly 1 in every 10 Washington workers is in those professions, according to the U.S. Bureau of Labor Statistics. The University of Washington’s computer science school — recently named for one of the state’s most famous natives, Microsoft co-founder Paul Allen — is world class. There is no brain drain here; no state does better at hanging on to its college graduates. And the state is consistently a magnet for investment capital. Washington businesses attracted nearly $1.6 billion in venture capital last year, the sixth-highest total in the nation.

CNBC bases its rankings on 66 metrics, grouped and weighted, with a possible point total of 2,500. Washington received 1,621 points.

This year’s categories and point totals are:

Washington ranked 5th in Workforce, 32nd in Infrastructure, 32nd in Cost of Doing Business, 3rd in Economy, 5th in Quality of Life, 3rd in Technology and Innovation, 19th in Education, 31st in Business Friendliness, 8th in Access to Capital and 37th in Cost of Living.

CNBC reports that this year’s rankings were highly competitive.

Our 2017 field of Top States is our most competitive since we began ranking the states more than a decade ago. Washington outranks its nearest competitor by a mere five points. And second-place Georgia outscores third-place Minnesota by a single point.

Georgia and Minnesota illustrate a running theme in our study year after year: There is no exclusive path to competitiveness.

Georgia follows a more traditional route, the one typically favored by business, emphasizing lower taxes and fewer regulations. The state has come roaring back from the Great Recession, which hit Georgia hard. Now it has the best all-around economy in the nation, according to our study. But it falls seriously short in two categories that often benefit from more state support: Education, where it finishes No. 33, and Quality of Life, where it finishes No. 28.

By contrast, Minnesota takes the position that you get what you pay for. The North Star State finishes No. 2 for Education and No. 3 for Quality of Life. And the state is no slouch in the Economy category, finishing No. 6 with the help of a solid housing market and strong state finances. But the state finishes No. 36 for Cost of Doing Business and No. 31 for Cost of Living. State taxes — at least as far as the top brackets go — are among the highest in the country.

As we’ve written previously, we’re skeptical when it comes to these sorts of “best states” rankings. A point or two here or there would have bumped Washington from the enviable top spot. And, as CNBC points out, the ranking methodology allows for multiple paths to success. Skeptical or not, though, we like seeing Washington topping this list. And we find, as usual, that there’s a lot of very useful information to be gleaned from reviewing the data. CNBC does a commendable job of sharing its methodology and data sources.

The report also identifies some areas of concern for Washington, noting education funding, infrastructure and the high cost of living and cost of doing business. The Legislature, of course, has made significant strides in both education and infrastructure funding, passing the comprehensive transportation finance package several years ago and completing the court-ordered education funding work this session.

For more on how these rankings compare generally, we recommend this 2012 report from the Washington Research Council.