Knowledgeable observers continue to evaluate the 2019 tax legislation passed by lawmakers. As the Washington Research Council reports, although the final tally is not yet completed, the totals for 2019-2021 top $1 billion.

Columnist and former president of the Association of Washington Business Don Brunell points out the historic magnitude of the tax and spending hikes.

Our state’s budget grew by a whopping 17.5 percent, which is one of the largest increases ever…

The $52.4 billion budget is nearly $8 billion more than the previous two-year spending authorization (2017-19)…

It could have been worse. Inslee’s proposals for new taxes on carbon emissions and on capital gains failed. However, large banks, high-end home buyers and merchants in border communities got clobbered.

Read the column to grasp the full impact.

The Walla Walla Union-Bulletin editorial board called out lawmakers for use of a title-only bill to pass the tax on large banks.

In this case, lawmakers used a “title-only bill” as the vehicle to push through a tax increase on big banks in the final hours of the legislative session. The Seattle Times reported Democrats used title-only bill HB 2167, which emerged from behind closed doors with all the blanks filled in. It calls for large out-of-state banks to have their business and occupation tax nearly doubled, generating about  $130 million in new revenue for the state over the next two years….

This is just wrong.

The people’s business should be done in public.

The real estate excise tax increase was part of legislators’ interest in increasing the progressivity of the tax structure. The chart below, from a WRC post, shows how it might work. 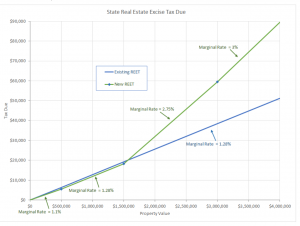 The new tax schedule, shown in green, has a progressive structure…

As Sjoblom has written previously, the graduated REET is also more volatile than the existing flat rate tax.