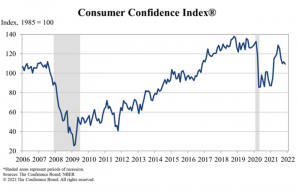 “Consumer confidence moderated in November, following a gain in October,” said Lynn Franco, Senior Director of Economic Indicators at The Conference Board. “Expectations about short-term growth prospects ticked up, but job and income prospects ticked down. Concerns about rising prices—and, to a lesser degree, the Delta variant—were the primary drivers of the slight decline in confidence. Meanwhile, the proportion of consumers planning to purchase homes, automobiles, and major appliances over the next six months decreased. The Conference Board expects this to be a good holiday season for retailers and confidence levels suggest the economic expansion will continue into early 2022. However, both confidence and spending will likely face headwinds from rising prices and a potential resurgence of COVID-19 in the coming months.”

It’s important to note, as the Conference Board does, that

[t]he cutoff date for the preliminary results was November 19, before recent news of the Omicron COVID-19 variant.

It’s too soon to know impact, if any, Omicron will have on consumer behavior. Last week, another survey, the University of Michigan Index of Consumer Sentiment, also showed declining confidence, again ahead of Omicron.

Consumers expressed less optimism in the November 2021 survey than any other time in the past decade about prospects for their own finances as well as for the overall economy. The decline was due to a combination of rapidly escalating inflation combined with the absence of federal policies that would effectively redress the inflationary damage to household budgets. While pandemic induced supply-line shortages were the precipitating cause, the roots of inflation have grown and spread more broadly across the economy. One-in-four consumers cited inflationary erosions of their living standards in November. Rather than gradually easing along with diminished shortages, complaints about falling living standards doubled in the past six months and quintupled in the past year. Consumers anticipated declining inflation adjusted incomes (see the chart), and expected spending cutbacks due to rising inflation to slow the pace of growth in the national economy in the year ahead. With one important caveat: consumers have a strong desire to resume more normal holiday gatherings with family and friends, and to use their accumulated savings to fund their celebrations and gifts despite higher prices. (Emphasis added.)

We’ll base our hopes for holiday shopping on that last sentence. Washington retailers have been optimistic that this year’s holiday sales would shatter previous records. The Washington Retail Association reported last month:

During the months of November and December, taxable retail sales are expected to grow between 8.5 percent and 10.5 percent over the 2020 season.

So, what’s impacting consumer behavior? Consumers are the drivers, and they are well-positioned as incomes have continued to rise and savings rates are still strong today. Due to the holiday disruptions over the past 20 months, Pent-up demand is driving shoppers to prioritize gifts for family and friends. Customers are also planning to shop earlier this year, with 49% of holiday shoppers saying they have already begun shopping at the end of October.

Those factors remain at play. Public policy matters, as always, and a restoration of confidence will depend to a large extent on faith that appropriate steps are being taken to control both inflation and the virus.